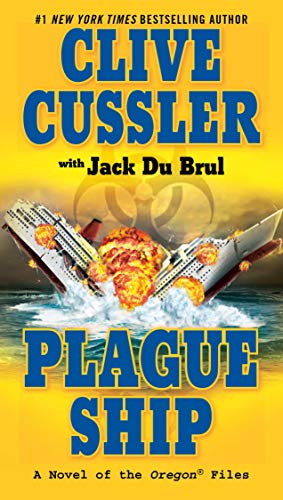 In Stock
$15,49
inc. GST
Cussler's bestselling series charts the exploits of the "Oregon," a covert ship completely dilapidated on the outside but, on the inside, packed with sophisticated weaponry and intelligence-gathering equipment. This fifth exhilarating adventure is available in a tall Premium Edition. (Men's Adventure)
Very Good Good Well Read
Only 1 left

Chairman Juan Cabrillo and the rest of the Corporation's mercenaries fight to stop a corrupt activist group from unleashing a viral attack in this #1 New York Times-bestselling adventure from the Oregon Files.

Captained by the rakish, one-legged Juan Cabrillo and manned by a crew of former military and spy personnel, the Oregon is a private enterprise, available for any government agency that can afford it. They've just completed a top secret mission against Iran in the Persian Gulf when they come across a cruise ship adrift at sea. Hundreds of bodies litter its deck, and, as Cabrillo tries to determine what happened, explosions rack the length of the ship. Barely able to escape with his own life and that of the liner's sole survivor, Cabrillo finds himself plunged into a mystery as intricate - and as perilous - as any he has ever known and pitted against a cult with monstrously lethal plans for the human race . . . plans he may already be too late to stop

Jack Du Brul is a graduate of the Westminster School and George Washington University. Du Brul has climbed Masada at noon, swam in the Arctic Ocean off Point Barrow, explored war-torn Eritrea, camped in Greenland, and been gnawed on by piranhas in the Amazon River. He lives in Burlington, Vermont.

GOR001427854
Plague Ship by Clive Cussler
Clive Cussler
Oregon Files
Used - Very Good
Paperback
Unknown
0
0425226697
9780425226698
N/A
Book picture is for illustrative purposes only, actual binding, cover or edition may vary.
This is a used book - there is no escaping the fact it has been read by someone else and it will show signs of wear and previous use. Overall we expect it to be in very good condition, but if you are not entirely satisfied please get in touch with us.