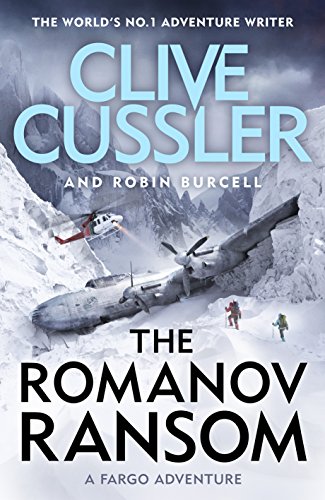 The Romanov Ransom
by Clive Cussler

The discovery of a long-lost airliner . . .
A modern-day kidnapping . . .
And the return of the most terrifying evil the world has ever seen.

When a kidnapping captures the attention of treasure-hunting team Sam and Remi Fargo, they find themselves on the trail of the legendary Romanov Ransom - a Russian fortune stolen by the Nazis during World War II.

Hunting a neo-Nazi faction across Europe, North Africa and South America is their greatest quest yet. They must prevent the rise of a Fourth Reich, or witness the resurgence of the greatest evil of the modern world.

From the finest adventure writer alive, Clive Cussler's dark and thrilling mystery will keep you turning the pages late into the night.

Clive Cussler (Author)
Clive Cussler is the author or co-author of a great number of international bestsellers, including the famous Dirk Pitt (R) adventures, such as Havana Storm; the NUMA (R) Files adventures, most recently The Pharaoh's Secret; the Oregon Files, such as The Emperor's Revenge; the Isaac Bell historical thrillers, which began with The Chase; and the recent Fargo Adventures which lastly included The Solomon Curse. He lives in Arizona.

GOR008909823
The Romanov Ransom: Fargo Adventures #9 by Clive Cussler
Clive Cussler
Fargo Adventures
Used - Very Good
Paperback
Unknown
0
0718184696
9780718184698
N/A
Book picture is for illustrative purposes only, actual binding, cover or edition may vary.
This is a used book - there is no escaping the fact it has been read by someone else and it will show signs of wear and previous use. Overall we expect it to be in very good condition, but if you are not entirely satisfied please get in touch with us.