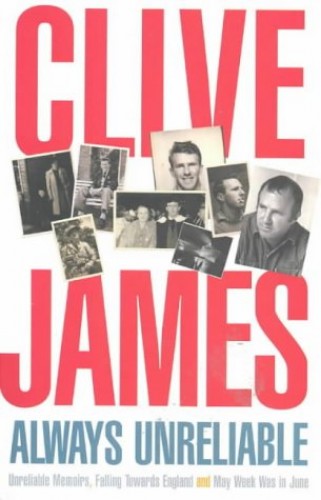 Out of Stock
$24.49
inc. GST
The first three volumes of Clive James's brilliantly sharp and outrageously funny autobiography . . .
Like New
Only 0 left

Always Unreliable is the collected first three volumes of Clive James's eloquently witty autobiographies, Unreliable Memoirs, Falling Towards England and May Week Was in June.

In Unreliable Memoirs we meet the young Clive James - dressed in shorts and growing up in post-war Sydney. With Falling Towards England, we find Clive living in a Swiss Cottage B&B, where he practises the Twist, anticipates poetical masterpieces he's yet to compose, and worries about his wardrobe. Finally, May Week Was In June sees Clive at Cambridge University, where he enthusiastically involves himself in college life (generally female lives) until May Week - not only in June but also a fortnight long - when he gets married.

You had better not read the book on a train, unless you are unselfconscious about shrieking and snorting in public . . . Vivid, cumulative and full of surprises * Observer *
You can't put it down . . . Not to be missed * Sunday Times *

Clive James was the multi-million-copy bestselling author of more than forty books. As well as his memoirs, he has published essays, literary and television criticism, travel writing, verse and novels. As a television performer he has appeared regularly for both the BBC and ITV, most notably as writer and presenter of the Postcard series of travel documentaries. His poetry collection Sentenced to Life and his translation of Dante's The Divine Comedy were both Sunday Times top ten bestsellers, and his collections of verse were shortlisted for many prizes. In 2012 he was appointed CBE and in 2013 an Officer of the Order of Australia. He died in 2019.

GOR010308005
Always Unreliable: Memoirs by Clive James
Clive James
Used - Like New
Paperback
Pan Macmillan
2003-07-01
560
0330418815
9780330418812
N/A
Book picture is for illustrative purposes only, actual binding, cover or edition may vary.
The book has been read, but looks new. The book cover has no visible wear, and the dust jacket is included if applicable. No missing or damaged pages, no tears, possible very minimal creasing, no underlining or highlighting of text, and no writing in the margins.