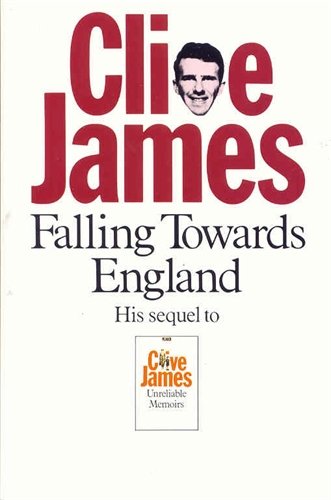 Falling Towards England
by Clive James

Falling Towards England by Clive James

In the first volume of Clive James's autobiography, Unreliable Memoirs, we said farewell to our hero as he set sail from Sydney Harbour, bound for London, fame and fortune. Finding the first of these proved relatively simple; the second two less so. Undaunted, Clive moved into a bed and breakfast in a Swiss Cottage where he practised the Twist, anticipated poetical masterpieces and worried about his wardrobe . . .

Falling Towards England is the entertaining and erudite second part in Clive James' life story, which he continues in May Week Was in June, North Face of Soho and The Blaze of Obscurity.

A comic triumph, full of terrific jokes and brilliantly sustained setpieces. -- Ian Hamilton * London Review of Books *
James' wickedly funny jokes and jibes make you laugh out loud and feel warm to the man. No wonder women wanted to feed him greens, and men lend him money. * The Times *

Clive James is the author of more than forty books. As well as his memoirs, which began with Unreliable Memoirs, he has published essays, literary and television criticism, travel writing, verse and novels. As a television performer he has appeared regularly for both the BBC and ITV, most notably as writer and presenter of the Postcard series of travel documentaries. In 1992 he was made a Member of the Order of Australia and in 2003 he was awarded the Philip Hodgins memorial medal for literature.

His work includes Cultural Amnesia, Poetry Notebook and his own translation of Dante's The Divine Comedy.

GOR000526376
Falling Towards England by Clive James
Clive James
Unreliable Memoirs
Used - Very Good
Paperback
Pan Macmillan
1986-10-24
176
0330294377
9780330294379
N/A
Book picture is for illustrative purposes only, actual binding, cover or edition may vary.
This is a used book - there is no escaping the fact it has been read by someone else and it will show signs of wear and previous use. Overall we expect it to be in very good condition, but if you are not entirely satisfied please get in touch with us.