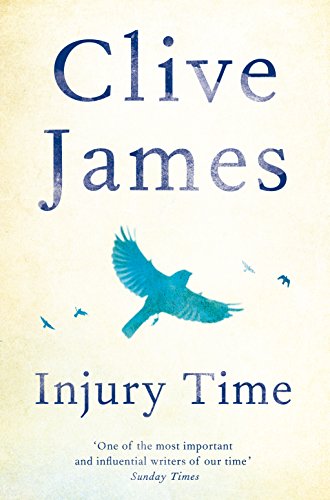 'James's confrontation with his approaching death is nothing short of inspirational' - Joan Bakewell, Independent

The publication of Clive James's Sentenced to Life was a major literary event. Facing the end, James looked back over his life with a clear-eyed and unflinching honesty to produce his finest work: poems of extraordinary power that spoke to our most elemental emotions.

Injury Time, following Sentenced to Life, finds James with more time on the clock than he had anticipated, and all the more determined to use it wisely - to capture the treasurable moment, and think about how best to live his remaining days while the sense of his own impending absence grows all the more powerfully acute. In a series of intimate poems - from childhood memories of his mother, to a vision of his granddaughter in graceful acrobatic flight - James declares 'family' to be our greatest blessing. He also writes beautifully of the Australia where he began his life, and where he hopes to 'reach the end'. Throughout Injury Time, James weaves poems which reflect on the consolation and wisdom to be found in the art, music and books which have become ever more precious to him in his last years.

The poems in this moving, inspirational and unsentimental book are as accomplished as any he has ever written; indeed the unexpected gift of James's Injury Time shows him to be in the form of his life.

James as always been a fine poet with a considerable mastery of traditional forms as well as a marked capacity for the elegiac . . . Injury Time is a significant achievement and lasting testament to a man who is a marvel of a wordsmith and who in the face of a death sentence that has allowed him injury time has written some of his best poems . . . this is a book by a true artist. It will ring in the ears and tug at the heart of any reader -- Peter Craven * The Australian *
A worthy successor to his 2015 collection, Sentenced to Life . . . Injury Time, on the whole, reminds us that James is, and has always been, a poet of clarity and control. His mastery of metre and rhyme is indisputable . . . Some of the more personal ones about his looming-but-deferred death have so much in common with the tone and diction of late poems by John Donne that it can seem as if the intervening four centuries had never happened . . . If Injury Time proves to be James' last collection (as it well may not) it will be a more than memorable testament to have left behind * Sydney Morning Herald *
Injury Time heads the latest/last collection of his poems, which are rightly heralded as 'a major literary event'. Though the title's sporting metaphor is characteristic, it has very little to do with 'sport'. The poems are as widely ranging and inventive as ever, both in their form and their content. They range daringly from a splendidly substantial celebration of the deaf Beethoven to various self-revealing meditations on his own carcinoma. The latter can be admired at full strength in 'Night-Walkers Song', but his playful wit and imagination are as ever wonderfully varied -- Katherine Duncan-Jones, The Times Literary Supplement, Books of the Year 2017
James's confrontation with his approaching death is nothing short of inspirational -- Joan Bakewell * Independent *
A fresh volume of poetry describing the joys of the bonus years the great polymath has been given by medicine, determination and love * Evening Standard *
James has approached the time of his vanishing with grace and good humour, not sentimentality or anger. These poems are death-haunted but radiant with the felt experience of what it means to be alive * Financial Times *
Here are these amazing works, highly praised, technically and emotionally heart-stopping poems reflecting gratefully on a life . . . James's famous voice twinkles even in his weakened state -- Douglas Murray * Spectator *
James's recent poems . . . represent the very best work James has ever done in verse -- Jason Guriel * New Republic *

Clive James was the multi-million-copy bestselling author of more than forty books. As well as his memoirs, he has published essays, literary and television criticism, travel writing, verse and novels. As a television performer he has appeared regularly for both the BBC and ITV, most notably as writer and presenter of the Postcard series of travel documentaries. His poetry collection Sentenced to Life and his translation of Dante's The Divine Comedy were both Sunday Times top ten bestsellers, and his collections of verse were shortlisted for many prizes. In 2012 he was appointed CBE and in 2013 an Officer of the Order of Australia. He died in 2019.

GOR009798600
Injury Time by Clive James
Clive James
Used - Very Good
Paperback
Pan Macmillan
2018-09-06
80
1509852980
9781509852987
N/A
Book picture is for illustrative purposes only, actual binding, cover or edition may vary.
This is a used book - there is no escaping the fact it has been read by someone else and it will show signs of wear and previous use. Overall we expect it to be in very good condition, but if you are not entirely satisfied please get in touch with us.