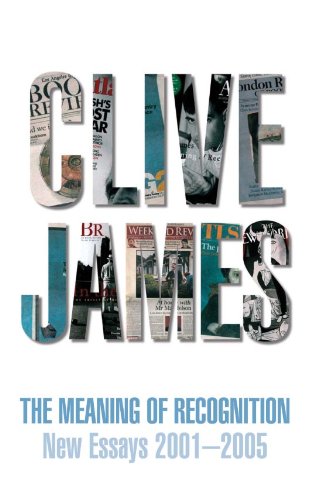 The Meaning of Recognition
by Clive James

Out of Stock
$25.49
inc. GST
A dazzling collection - inspiring, illuminating and intelligent.
Very Good
Only 0 left

The Meaning of Recognition Summary

`Sandwiched between two dissections of the difference between celebrity and recognition are stylish analyses of writers from Philip Larkin to Philip Roth, celebrations of The West Wing and The Sopranos and even a lament for the decline of Formula One motor racing. What unites them is James's distinctive tone and his ability to combine seriousness of intent with the fluency and wit for which he is best known' Sunday Times

Literary critic, cultural commentator, TV documentary film maker, journalist, novelist, poet, political analyst, satirist and Formula One fan: Clive James is a man (and master) of many talents. A contemporary everyman, he is also unmistakably himself, and The Meaning of Recognition - which takes the reader from London to Bali, from the theatre to the library, from pre-election campaigning to sitting at home watching TV - shows him at his most intelligent, insightful, honest and heartfelt.

`Clive James, the most glorious prose stylist of his generation, refuses to stop learning ever more about the world' New Statesman, Books of the Year

`Wonderful stuff: yet more evidence of James's vast and learned sanity, piquantly expressed . . . The subjects are startlingly varied but the tone is constant: erudite, engaged and engaging, and invariably glazed with wit' Daily Telegraph

Clive James is the author of more than forty books. As well as essays, he has published collections of literary and television criticism, travel writing, verse and novels, plus five volumes of autobiography, Unreliable Memoirs, Falling Towards England, May Week Was In June, North Face of Soho and The Blaze of Obscurity. As a television performer he appeared regularly for both the BBC and ITV, most notably as writer and presenter of the Postcard series of travel documentaries. His popular Radio 4 series A Point of View has been published in volume form. He has also published several poetry collections, a verse commentary of Proust, Gate of Lilacs, and a translation of Dante's The Divine Comedy. In 1992 he was made a Member of the Order of Australia and in 2003 he was awarded the Philip Hodgins memorial medal for literature. He holds honorary doctorates from Sydney University and the University of East Anglia. In 2012 he was appointed CBE and in 2013 an Officer of the Order of Australia.

GOR001877432
The Meaning of Recognition: New Essays 2001-2005 by Clive James
Clive James
Used - Very Good
Paperback
Pan Macmillan
2006-10-01
384
0330440284
9780330440288
N/A
Book picture is for illustrative purposes only, actual binding, cover or edition may vary.
This is a used book - there is no escaping the fact it has been read by someone else and it will show signs of wear and previous use. Overall we expect it to be in very good condition, but if you are not entirely satisfied please get in touch with us.