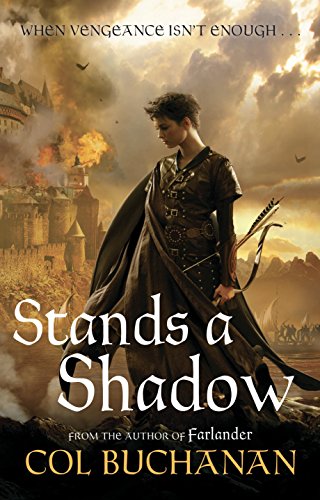 Stands a Shadow by Col Buchanan

`One of the most refreshing new fantasies out there' SFX

`Engaging and addictive . . . one of the best novels I've read this year' Civilian-Reader blog

Stands a Shadow by Col Buchanan

Still grieving the death of her son, the Holy Matriarch of Mann has ordered her troops to embark on a mission to the Mercian Free Ports. Riding at the head of her army she plans to finally conquer the city of Bar-Khos, whose walls have kept them at bay for ten long years.

Ash has other plans for her. The old Roshun warrior is determined that he will have vengeance for the crimes she has committed. But such a course of retribution is in direct opposition to everything he has lived for - this isn't a Roshun vendetta - it's personal.

While Ash battles with his conscience, Che, the Matriarch's personal Diplomat and assassin, is questioning his own path. Watching as the Mannian army slaughters their way across the world, he wonders whether he believes any of the doctrine he has been taught to follow.

As the battle for Bar-Khos intensifies, more and more lives are affected: Bahn who leaves all he loves in the city to try to protect it from the ravening Mannian empire, Bull the murderer who senses a chance to make things right, and Curl, the young prostitute who is determined to seek her own retribution on the field of battle.

When the two armies clash - all looks set to be decided. But it's not sheer force that will win this battle. But the tormented determination of one man seeking redemption . . .

Colin Buchanan was born in Lisburn, Northern Ireland, in 1973. From an early age he turned to reading and writing fantastical works to escape his troubles. In school he was the quiet dreamer who always sought out the back of the classroom. Later, in his stretches of work as a copywriter, he would be the quiet dreamer who always sought out the back of the office. In recent years he has mostly settled down, and loves nothing more than a late-night gathering around a fire with good friends.
GOR003376594
9780230744820
0230744826
Stands a Shadow by Col Buchanan
Col Buchanan
Used - Very Good
Hardback
Pan Macmillan
2011-07-15
432
N/A
Book picture is for illustrative purposes only, actual binding, cover or edition may vary.
This is a used book - there is no escaping the fact it has been read by someone else and it will show signs of wear and previous use. Overall we expect it to be in very good condition, but if you are not entirely satisfied please get in touch with us
Trustpilot