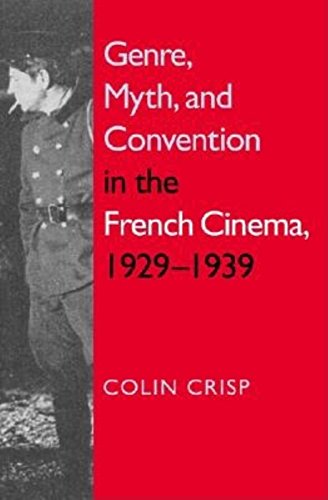 Genre, Myth, and Convention in the French Cinema, 1929-1939 examines classic French film, exploring and analyzing the cinema as an institution, the textual system to which it gave rise, and the light that such an approach can shed on the process of production and reception of specific films. Colin Crisp identifies recurrent patterns in the fields of character, narrative, and setting in the French cinema of the early sound period and delineates the myths that these patterns embodied. In Part One he discusses the 1,300 films produced by the French cinema in the 1930s, treating them as a single global textual system that returns obsessively to certain types of story, character, and setting. Part Two deals with publications of the period that comment on those films. The extensive viewer's guide and filmography make this book an essential resource for students of the history of cinema.

""Crisp's wide-ranging exploration of the first decade of sound cinema in France build significantly on his pivotal industrial study, The Classic French Cinema 1930-1960... this is one of the most stimulating works on French film written over the last decade. Summing Up: Highly recommended. Graduate students, researchers, and faculty."" --S./P>--S. Liebman, CUNY Graduate Center""Choice"" (01/01/2003)

Before his recent retirement, Colin Crisp was Associate Professor of Film and Media Studies at Griffith University in Brisbane, which he joined when it first opened in 1975, and where he served as Chairman and Dean of Humanities, and later as Acting Provost and Director of the Queensland College of Art. He has published a number of books on the French cinema, and notably The Classic French Cinema 1930-1960, which the present work supplements by its consideration of genre and myth in the first decade of the French sound cinema.

ContentsAcknowledgementsIntroductionPart One: Thirteen Hundred Films1. Identity2. Nation and Race3. Class 4. Gender and the Family5. Education, the Media and the Law 6. Art and TranscendencePart Two: Genre, Star, Box Office7. Cinematic Genres in France: "a grotesque mask," or "the genius of the system?"8. The Stars in their (dis)courses: "anemic dreams and poetry for pallid people?"9. Box Office Success in the Thirties: "films debased by popular taste?"ConclusionAppendix A. A Viewer's Guide; Appendix B. Filmography 1929-1939; Notes; Bibliography; Index

GOR010308746
Genre, Myth, and Convention in the French Cinema, 1929-1939 by Colin Crisp
Colin Crisp
Used - Like New
Paperback
Indiana University Press
2002-06-01
488
0253215161
9780253215161
N/A
Book picture is for illustrative purposes only, actual binding, cover or edition may vary.
The book has been read, but looks new. The book cover has no visible wear, and the dust jacket is included if applicable. No missing or damaged pages, no tears, possible very minimal creasing, no underlining or highlighting of text, and no writing in the margins.