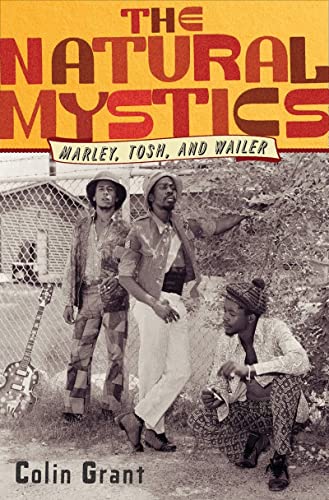 The Natural Mystics
by Colin Grant

The Natural Mystics: Marley, Tosh, and Wailer by Colin Grant

Over one dramatic decade, a trio of Trenchtown R&B crooners swapped their 1960s Brylcreem hairdos and two-tone suits for 1970s battle fatigues and dreadlocks to become the Wailers one of the most influential groups in popular music. Colin Grant presents a lively history of this remarkable band from their upbringing in the brutal slums of Kingston to their first recordings and then international superstardom. With energetic prose and stunning, original research, Grant argues that these reggae stars offered three models for black men in the second half of the twentieth century: accommodate and succeed (Marley), fight and die (Tosh), or retreat and live (Livingston). Grant meets with Rastafarian elders, Obeah men (witch doctors), and other folk authorities as he attempts to unravel the mysteries of Jamaica's famously impenetrable culture. Much more than a top-flight music biography, The Natural Mystics offers a sophisticated understanding of Jamaican politics, heritage, race, and religion a portrait of a seminal group during a period of exuberant cultural evolution."

A wide-ranging look at the cultural, political and religious forces that inspired the pioneering reggae group.... A lively, informed study of the Wailers, though not a straightforward introduction to them.
As Grant plots out [The Wailers'] biographical arcs, he skillfully conveys how tightly bonded the three were---not just as a creative team but as a band of brothers....By the time we get to the part where the trio dissolves in 1974, we feel the pain of their divorce because we've learned so much about their decade-long struggle to make it

The author of Negro with a Hat, a biography of Marcus Garvey, Colin Grant is an independent historian who works for BBC Radio. The son of Jamaican immigrants, he lives in London.

GOR006464485
The Natural Mystics: Marley, Tosh, and Wailer by Colin Grant
Colin Grant
Used - Very Good
Hardback
WW Norton & Co
2011-08-01
305
0393081176
9780393081176
N/A
Book picture is for illustrative purposes only, actual binding, cover or edition may vary.
This is a used book - there is no escaping the fact it has been read by someone else and it will show signs of wear and previous use. Overall we expect it to be in very good condition, but if you are not entirely satisfied please get in touch with us.