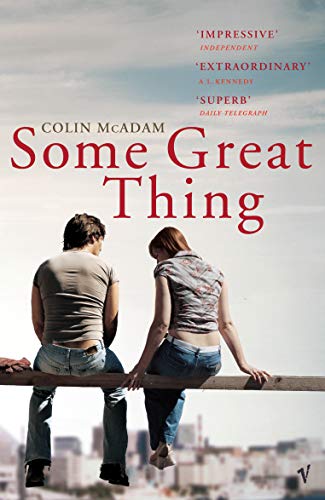 Some Great Thing
by Colin McAdam

In Stock
$13.69
inc. GST
Two men, from different ends of society, see the opportunities: Jerry McGuinty, plasterer-turned-builder, a simple, self-made man, and Simon Struthers, who has inherited wealth and position. As their careers and successes run in parallel, we begin to see how love is suffocated by work, how individuals are slowly crushed by progress.
Very Good
Only 2 left

Some Great Thing by Colin McAdam

Ottawa in the seventies is colourless, cold, and aching for character, ripe for the taking. Two men, from different ends of society, see the opportunities: Jerry McGuinty, plasterer-turned-builder, a simple, self-made man, and Simon Struthers, with inherited wealth and position, but nothing inside him but longing.

As their careers and successes run in parallel - Jerry with his new wife, Kathleen, who likes a drink even more than she likes him, and Simon with his endless affairs and intrigues - we begin to see how a landscape can be shaped by desire. When both men realise that something is missing, and go in search of it, their lives start to intersect, and the story spirals to its astonishing conclusion.

An extraordinary novel... A beautiful tragedy and a series of painful, yet oddly exquisite surprises... Some Great Thing promises to be not just the fiction debut of the year, but also its highlight -- John Burnside * Scotsman *
This is an extraordinary, powerful novel: technically ambitious, passionate and beautifully observed, filled with the truth of human frailty, the mystery of crafts and the stark bewilderment of love -- A. L. Kennedy
Some Great Thing is just about as fresh as it gets. Wry, harrowing, visceral, the writing bristles with imagination and intent. Colin McAdam has taken a jackhammer to the modern novel and come up with something bright and strong and new -- Rupert Thomson
Superb...Through muscular and powerful writing, McAdam thwarts all expectations and makes his material thrum with importance, insight and sad truth...Utterly compelling from first to last * Daily Telegraph *
'Precociously accomplished, wise, deeply moving-Perfectly pitched-A dazzling down-payment on posterity' * Scotland on Sunday *

Colin McAdam is a Canadian who grew up in Hong Kong, Denmark, England and Canada. After completing a doctorate in England, he moved to Sydney, Australia, where he now lives. His second novel, Fall, was published in 2009 to critical acclaim.

GOR000835219
Some Great Thing by Colin McAdam
Colin McAdam
Used - Very Good
Paperback
Vintage Publishing
2005-03-03
368
0099458942
9780099458944
N/A
Book picture is for illustrative purposes only, actual binding, cover or edition may vary.
This is a used book - there is no escaping the fact it has been read by someone else and it will show signs of wear and previous use. Overall we expect it to be in very good condition, but if you are not entirely satisfied please get in touch with us.