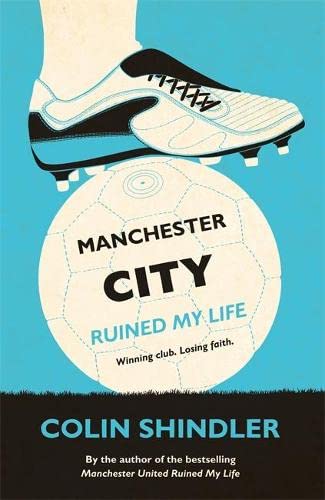 A beautifully written and poignant football memoir from the author of the bestselling Manchester United Ruined My Life.

Colin Shindler has previously written of his deep love for Manchester City in the bestselling Manchester United Ruined My Life and three other previous books. Now he tells the story of his sorrowful disenchantment with his home town club as, on the instruction of its new foreign owners, it turns itself remorselessly into a global brand. Trophyless since 1976, in 2011 Manchester City won the FA Cup and set off on their quest for the Premiership and the Champions League. In their zeal to win every competition the new Manchester City has spent money with wild abandon, signing outstandingly talented players as well as a few ordinary ones but in almost every case at hugely inflated prices. From the nail-biting win over Gillingham in the League Two Play Off final at Wembley in 1999 to the climax of the 2011 season, Shindler watches his team get steadily more successful and, to his own bewilderment, feels steadily more alienated from it. This is the story of a frustrated romantic who finds in the glitz and glamour of the current media-obsessed game a helter-skelter of artificially fabricated excitement. As he details how football courses through his veins Shindler tells how it intersects with his own life, a life that has been marked by family tragedy, and how he finally found personal redemption even as his team lost its soul.

Reviews of Manchester United Ruined My Life:
"This is a wonderful book ... it is also extremely funny"

* The Times *
His prose ... is never less than sharp, smart and easy on the eye ... His writing is so attractive ... [I] would be thrilled to read more * Jim White, Guardian *
It is his childhood and absent friends that touch the rawest, universal nerve * Simon Garfield, Mail on Sunday *
Shindler's art lies in conversational writing, and an ability to change gear deftly from humour to devotion and back through fanaticism to the black comedy of Manchester City * Howard Davies, The Times *
Shindler is both touching and convincing in his evocation of his formative years ... it's skilful, entertaining and heading for the top of the league * Richard Pendlebury, Daily Mail *
Evocative, funny-sad and warm-hearted * Michael Henderson, The Times *
Sits in the same class as Fever Pitch ... Shindler's down-to-the-bone honesty also reminds us self-indulgence can be great entertainment * The Times *
This could still be the most important football book since Fever Pitch capturing, as it does, the delicious irony that caused City fans to fall into a soon to be legendary chorus of "Are you watching Macclesfield?" * Mick Middles, Manchester Evening News *
"Manchester City Ruined My Life...is funny, touching and telling." * Sunday Express *
'****' * The Daily Telegraph *

Colin Shindler was born and raised in Manchester, educated at Bury Grammar School and Gonville & Caius College Cambridge, and has worked as a writer and a producer in film, television and radio. He has written two novels and presented history programmes on radio and television. In addition to the books and articles he has written on sport and British and American social and cultural history, he also lectures on film and history at Cambridge University. In recent years he has never been happier than when he saw Lancashire win the County Championship in 2011.

GOR003947683
9780755363605
0755363604
Manchester City Ruined My Life by Colin Shindler
Colin Shindler
Used - Very Good
Hardback
Headline Publishing Group
2012-05-24
320
N/A
Book picture is for illustrative purposes only, actual binding, cover or edition may vary.
This is a used book - there is no escaping the fact it has been read by someone else and it will show signs of wear and previous use. Overall we expect it to be in very good condition, but if you are not entirely satisfied please get in touch with us
Trustpilot