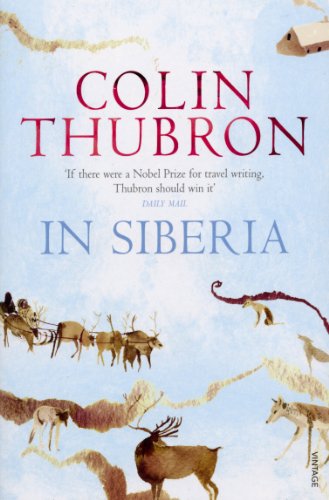 In Siberia
by Colin Thubron

This is the account of Thubron's 15,000-mile journey through an astonishing country - one twelfth of the land surface of the whole earth.

In Siberia by Colin Thubron

This is the account of Thubron's 15,000-mile journey through an astonishing country - one twelfth of the land surface of the whole earth. He journeyed by train, river and truck among the people most damaged by the breakup of the Soviet Union, traveling among Buddhists and animists, radical Christian sects, reactionary Communists and the remnants of a so-call Jewish state; from the site of the last Czar's murder and Rasputin's village, to the ice-bound graves of ancient Sythians, to Baikal, deepest and oldest of the world's lakes.

It is the story of a people moving through the ruins of Communism into more private, diverse and often stranger worlds.

I have never made it as far as Siberia, but reading this book makes me feel as if I have actually been there. Thubron weaves his own observations beautifully with the history of this part of the world -- Lorraine Kelly * Sunday Express *
Colin Thubron is in a class of his own in [having] a literary talent for reportage which is both crisp and lyrical * Scotsman *
Captivating: a passionately engaged portrait of one of the earth's most mysterious regions...confirms Thubron's place in the pantheon of the writing greats * Sunday Times *
There are currently few writers and fewer books capable of transporting a reader to another place as beautifully as Thubron does in this work. It is simply superb * Observer *
A profound meditation on how some of the great upheavals of this century touched ordinary lives -- Kazuo Ishiguro * Observer, Books of the Year *

Colin Thubron is an acknowledged master of travel writing, and the winner of many prizes and awards. His first writing was about the Middle East - Damascus, Lebanon and Cyprus. In 1982 he travelled into the Soviet Union in an ancient Morris Marina, pursued by the KGB, a journey he recorded in Among the Russians. From these early experiences developed his classic travel books: Behind the Wall (winner of the Hawthornden Prize and the Thomas Cook Travel Award), The Lost Heart of Asia, In Siberia (Prix Bouvier) and Shadow of the Silk Road (all available in Vintage). In 2010 Colin Thubron became President the Royal Society of Literature.

GOR003132957
In Siberia by Colin Thubron
Colin Thubron
Used - Very Good
Paperback
Vintage Publishing
2008-10-02
304
0099459264
9780099459262
N/A
Book picture is for illustrative purposes only, actual binding, cover or edition may vary.
This is a used book - there is no escaping the fact it has been read by someone else and it will show signs of wear and previous use. Overall we expect it to be in very good condition, but if you are not entirely satisfied please get in touch with us.