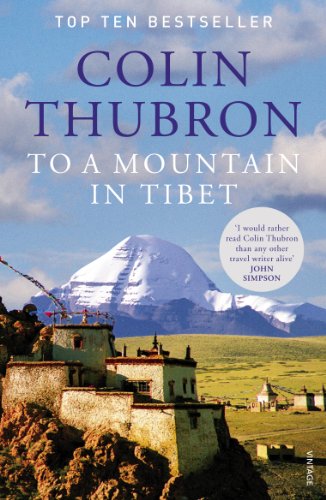 To a Mountain in Tibet
by Colin Thubron

In Stock
$17.49
inc. GST
TOP TEN BESTSELLERMount Kailas is the most sacred of the world's mountains - holy to one fifth of humanity. Having recently witnessed the death of the last of his family, his trek around the great mountain awakes an inner landscape of love and grief, restoring precious fragments of his own past.
Like New Very Good Well Read
Only 1 left

To a Mountain in Tibet Summary

To a Mountain in Tibet by Colin Thubron

TOP TEN BESTSELLER Mount Kailas is the most sacred of the world's mountains - holy to one fifth of humanity. Isolated beyond the central Himalayas, its summit has never been scaled, but for centuries the mountain has been ritually circled by Hindu and Buddhist pilgrims. Colin Thubron joins these pilgrims, after an arduous trek from Nepal, through the high passes of Tibet, to the magical lakes beneath the slopes of Kailas itself. He talks to secluded villagers and to monks in their decaying monasteries; he tells the stories of exiles and of eccentric explorers from the West. Yet he is also walking on a pilgrimage of his own. Having recently witnessed the death of the last of his family, his trek around the great mountain awakes an inner landscape of love and grief, restoring precious fragments of his own past. 'I would rather read Colin Thubron than any other travel writer alive' - John Simpson

To a Mountain in Tibet Reviews

"Given that Thubron has shown himself over a lifetime's work to be our finest, is seems fitting that what is as much memoir as travel book should have as its setting the greatest spiritual pilgrimage the East has to offer" * Daily Telegraph *
"A master class in travel writing that's also infused with the author's "shadowy melancholy" of ageing and grief...Thubron showcases here all the skills that have earned him the champion's belt as Britain's best living travel writer" * Sunday Times *
"Exquisitely written, To a Mountain in Tibet is not just a travelogue; it amounts to a heart-felt hosanna to the travails of walking... Colin Thubron takes us back to the days of exploration when the going was rough. To a Mountain in Tibet, a matchless work of literary travel, confirms Thubron as a wise and discriminate prospector in the affairs of man" -- Ian Thompson * Irish Times *
"Daring and brilliant. Thubron has crafted a book which beautifully describes one man's experience of loss, familial love, and even the state of mortal indeterminacy itself - how we all keep our memories, consoled and bewildered by turns, the sun on our faces, and the birds carrying above" -- Joanna Kanvenna * Observer *
"This is a bold and brave journey, an elegiac book by a master of prose at the height of his powers" -- Justin Marozzi * Evening Standard *

Colin Thubron is an acknowledged master of travel writing, and the winner of many prizes and awards. His first writing was about the Middle East - Damascus, Lebanon and Cyprus. In 1982 he travelled into the Soviet Union in an ancient Morris Marina, pursued by the KGB, a journey he recorded in Among the Russians. From these early experiences developed his classic travel books: Behind the Wall (winner of the Hawthornden Prize and the Thomas Cook Travel Award), The Lost Heart of Asia, In Siberia (Prix Bouvier) and Shadow of the Silk Road (all available in Vintage). In 2010 Colin Thubron became President the Royal Society of Literature.

GOR010588216
To a Mountain in Tibet by Colin Thubron
Colin Thubron
Used - Like New
Paperback
Vintage Publishing
2012-01-05
240
0099532646
9780099532644
N/A
Book picture is for illustrative purposes only, actual binding, cover or edition may vary.
This is a used book - there is no escaping the fact it has been read by someone else and it will show signs of wear and previous use. Overall we expect it to be in very good condition, but if you are not entirely satisfied please get in touch with us.