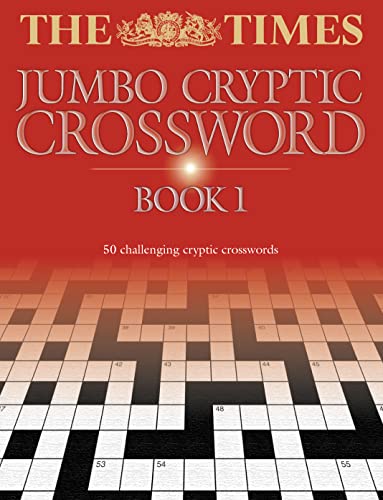 A reissue of the first Times jumbo crossword book, originally published in 1985 and including the initial 50 jumbo crosswords. This supremely fiendish collection is conceived to vex your wits and baffle your brain.

A reissue of the first Times jumbo crossword book, originally published in 1985 and including the initial 50 jumbo crosswords. This supremely fiendish collection is conceived to vex your wits and baffle your brain.

The Times Jumbo Cryptic Crossword Book 1 is a reissue of the The Times Book of Jumbo Crosswords, originally published in 1985.

The Times Jumbo Crossword was invented in 1970 by Edmund Akenhead, who put together this first compilation of over 50 crosswords. Initially published just four times a year on bank holidays, since 1997 the crossword has appeared on a weekly basis.

Each crossword is based on a 27 by 27 square grid, complete with over 70 fiendish cryptic clues, and solutions which take the form of single words and whole phrases, some of them filling the entire width or height of the grid.

Test your linguistic prowess to its limit and give your brain the workout it has been waiting for.

The late Roy Dean, retired diplomat, and frequent winner of The Times National Crossword Championships also left these words as his own tribute to the author of The Times Jumbo Crosswords - "What elephantine elegance, what breadth of erudition, what excitement, as the solver is led on from Shakespeare to Shaw, from the Bible to Brewer, from ancient Greece to modern science, until the onset of writer's cramp forces the pen from his fingers. How fitting that the name of Akenhead can be clued as 'a knowledge master.'"

Included in a special Observer supplement entitled "The Experts' Expert - Crossword Compilers" - Eric Chalkley (best known as 'Apex'), the senior critic said, 'Although I am basically an Ximenian, I always enjoy solving The Times crosswords, but as they don't name the setter I don't know who to recommend. However, the Times Jumbo Book of Crosswords by Edmund Akenhead, is a little masterpiece.'

About Compiled by Edmund Akenhead

Edmund Akenhead was the original editor of The Times Jumbo Crossword. He died in 1990.

GOR001650611
The Times Jumbo Cryptic Crossword Book 1: The world's most challenging cryptic crossword by Compiled by Edmund Akenhead
Compiled by Edmund Akenhead
Used - Very Good
Paperback
HarperCollins Publishers
2002-07-01
128
0007147155
9780007147151
N/A
Book picture is for illustrative purposes only, actual binding, cover or edition may vary.
This is a used book - there is no escaping the fact it has been read by someone else and it will show signs of wear and previous use. Overall we expect it to be in very good condition, but if you are not entirely satisfied please get in touch with us.