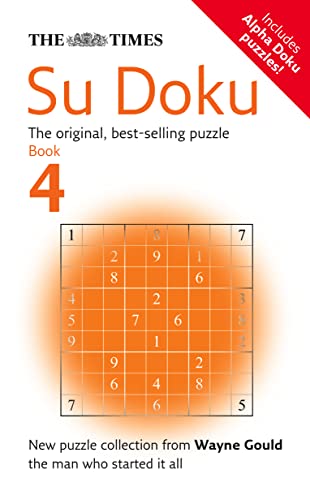 The Times Su Doku Book 4
by Compiled by Wayne Gould

The Times Su Doku Book 4: 100 challenging puzzles from The Times by Compiled by Wayne Gould

For those still in the dark, Su Doku is a number grid consisting of 9 large squares each divided into 9 smaller squares. You must complete the grid so that every column, every row and every 3x3 box contains the digits 1 to 9.

Wayne Gould, 59, is the brains behind this new craze. Now retired, he was a High Court judge in Hong Kong.

People everywhere are crazy about Su Doku. Find out what all the fuss is about by having a crack at The Times Su Doku, the original, the best and the market-leader.

About Compiled by Wayne Gould

Gould was a lawyer for 13 years in Matamata, New Zealand, before coming to Hong Kong in 1982 where he worked his way up to become Chief District Judge in 1993. He retired from the Judiciary in 1997 and, that same year, during a visit to Japan, he was in a bookstore where, not knowing how to read or speak Japanese, he was drawn to the puzzle which he first thought was a crossword. He was intrigued and later on he decided to take it with him to the United States and Britain. After his initial retirement, in efforts to pass time and sharpen his computer skills, Gould developed the computer program that generates Sudoku puzzles. Wayne Gould says retirement can now wait as Sudoku keeps him busier than ever. He travels between his different bases; Lantau and New Hampshire in the United States, where his wife Gaye is a professor of linguistics, and other parts of the world to which his new hobby has taken him. He has two children, daughter Sally, 29, and son, Scott, 27.

GOR000623419
The Times Su Doku Book 4: 100 challenging puzzles from The Times by Compiled by Wayne Gould
Compiled by Wayne Gould
Used - Very Good
Paperback
HarperCollins Publishers
2005-09-05
176
0007222416
9780007222414
N/A
Book picture is for illustrative purposes only, actual binding, cover or edition may vary.
This is a used book - there is no escaping the fact it has been read by someone else and it will show signs of wear and previous use. Overall we expect it to be in very good condition, but if you are not entirely satisfied please get in touch with us.