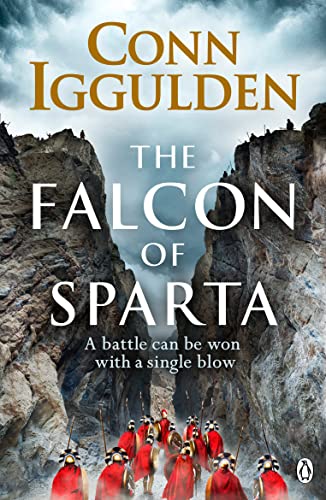 The Falcon of Sparta
by Conn Iggulden

The Falcon of Sparta Summary

The Falcon of Sparta: The bestselling author of the Emperor and Conqueror series' returns to the Ancient World by Conn Iggulden

In the Ancient World, one army was feared above all others.

401 BC. The Persian king Artaxerxes rules an empire stretching from the Aegean to northern India.

As many as fifty million people are his subjects.

His rule is absolute.

But the sons of Sparta are eager to play the game of thrones . . .

Battles can be won - or lost - with a single blow.

Princes fall. And when the dust of civil war settles, the Spartans are left stranded in the heart of an enemy's empire, without support, without food and without water.

Far from home, surrounded by foes, it falls to the young soldier Xenophon to lead the survivors against Artaxerxes' legendary Persian warriors.

Based on one of history's most epic stories of adventure The Falcon of Sparta masterfully depicts the ferocity and heroism that was the Ancient World.

'His finest novel to date, brings alive the extraordinary world of ancient Persia, as well as the ruthless nobility of the Spartans. The battle scenes are thrilling' Sunday Express

The Falcon of Sparta Reviews

His finest novel to date, brings alive the extraordinary world of ancient Persia, as well as the ruthless nobility of the Spartans. The battle scenes are thrilling and the men who fight in them are impeccably portrayed * Sunday Express *
Iggulden is in a class of his own when it comes to epic, historical fiction * Daily Mirror *
Iggulden tells an absolutely cracking story. The pace is nail-biting and the set-dressing magnificent * The Times *
One of our finest historical novelists * Daily Express *
Pacey and juicy, and packed with action * Sunday Times *

Conn Iggulden is one of the most successful authors of historical fiction writing today. He has written three previous bestselling historical series, including Wars of the Roses. Dunstan is a stand-alone novel set in the red-blooded world of tenth-century England.

GOR009894042
The Falcon of Sparta: The bestselling author of the Emperor and Conqueror series' returns to the Ancient World by Conn Iggulden
Conn Iggulden
Used - Very Good
Paperback
Penguin Books Ltd
2019-03-28
448
1405921536
9781405921534
N/A
Book picture is for illustrative purposes only, actual binding, cover or edition may vary.
This is a used book - there is no escaping the fact it has been read by someone else and it will show signs of wear and previous use. Overall we expect it to be in very good condition, but if you are not entirely satisfied please get in touch with us.