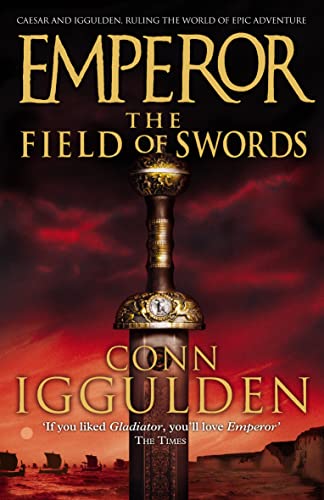 The Field of Swords
by Conn Iggulden

The third volume in the acclaimed Emperor series, in which Conn Iggulden brilliantly interweaves history and adventure to recreate the astonishing life of Julius Caesar - an epic tale of ambition and rivalry, bravery and betrayal, from an outstanding new voice in historical fiction.

The Field of Swords Summary

The Field of Swords (Emperor Series, Book 3) by Conn Iggulden

The third volume in the acclaimed Emperor series, in which Conn Iggulden brilliantly interweaves history and adventure to recreate the astonishing life of Julius Caesar - an epic tale of ambition and rivalry, bravery and betrayal, from an outstanding new voice in historical fiction.

THE GATES OF ROME, THE DEATH OF KINGS and now THE FIELD OF SWORDS tell the powerful, dramatic story of the friendship and enmity between the two men who ruled the Roman world.

Following the defeat of the Spartacus rebellion, Julius Caesar and Marcus Brutus, who have been sent to run the Roman colonies in Spain, return to challenge powerful senators to become one of the Consuls of Rome. Political opposition, family quarrels, armed rebellions and corruption make this a highly contemporary scene, fuelled by the intrigue of the major characters, who are now developing as full adults.

As he takes the legions north into mighty battles with the Gallic tribes, the imperious stand of Caesar and the leadership of his men, his new friendships with fellow leaders and his overwhelming ambition, begin to separate him from Brutus, the great swordsman and warrior. Their long friendship reveals ominous cracks under the strain. Although the Gallic conquests lead to Caesar's triumphal entry into Britain, the victories on the battlefield cause political rivalries at home, and ultimately the famous choice is presented to Caesar and Marcus Brutus. They must choose whether to cross the Rubicon - together or singly - and to take the fight to Rome itself.

Conn Iggulden is a brilliant storyteller. Characters jostle for space in the crowded streets, on the battlefields and in the corridors of the Senate. The friendship and rivalry between Caesar and Brutus provides compelling reading. Each book in the EMPEROR series causes readers to return to the previous novel, and ensures they also look forward hugely to the next.

The Field of Swords Reviews

`Iggulden is in a class of his own when it comes to epic, historical fiction' Daily Mirror

`Iggulden...tells an absolutely cracking story...the pace is nail-biting and the set dressing magnificent' The Times

`Iggulden weaves an entertaining tale of this world of men, swords, bows and the call of war and the plains' Daily Express

`I felt as if a blockbuster movie was unfolding before me...read the book before Hollywood takes it over' Daily Express

Born in London, Conn Iggulden read English at London University and worked as a teacher for seven years before becoming a full-time writer. Married with four children, he lives in Hertfordshire.

GOR003600515
The Field of Swords (Emperor Series, Book 3) by Conn Iggulden
Conn Iggulden
Emperor Series
Used - Very Good
Paperback
HarperCollins Publishers
2004-12-01
544
0007195265
9780007195268
N/A
Book picture is for illustrative purposes only, actual binding, cover or edition may vary.
This is a used book - there is no escaping the fact it has been read by someone else and it will show signs of wear and previous use. Overall we expect it to be in very good condition, but if you are not entirely satisfied please get in touch with us.