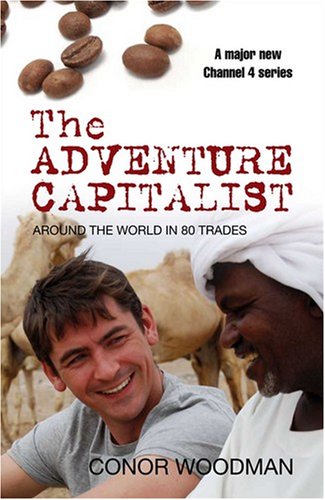 Around the world in 80 trades
by Conor Woodman

In Stock
$16.49
inc. GST
How one economist sold his house and took trade back to basics, buying and selling real goods in the world's oldest markets
Very Good Good Well Read
Only 1 left

Around the world in 80 trades Summary

Around the world in 80 trades: Adventures in economics, from coffee to camels and back by Conor Woodman

Economist Conor Woodman has decided to test his negotiating skills, charm and eye for a bargain against some of the world's oldest trading cultures.

He's sold his house to finance the trip, but if his hunches are right - trading Sudanese camels for Zambian coffee, coffee for South African red wine and then off to China to buy jade with the proceeds - he'll return six months later with a lot of money, some new friends and a whole raft of brilliant tall tales. Whether trading teak or tea, surfboards or seafood, Conor goes head-to-head with the best operators in the world's most hotly-contested markets. But will years of experience as a business analyst mean anything when he is suspected of being a spy? And can London's financial bear pit prepare him for a horde of vodka-fuelled horse traders on the plains of central Asia?

Part Undercover Economist, part Apprentice challenge, Around the World in 80 Trades offers an exciting insight into the human story behind the money in our pockets, and reminds us that making a living is about exactly that - living.

Conor Woodman is a thirty-something trained economist and the star of Channel 4's forthcoming 4 X 60-minute series The Adventure Capitalist, due to be aired in early Spring 2009. Conor is currently somewhere in Zambia, trying to find a buyer for several million Kenyan coffee beans...

GOR001587785
Around the world in 80 trades: Adventures in economics, from coffee to camels and back by Conor Woodman
Conor Woodman
Used - Good
Paperback
Pan Macmillan
2009-01-31
256
0330469568
9780330469562
N/A
Book picture is for illustrative purposes only, actual binding, cover or edition may vary.
This is a used book - there is no escaping the fact it has been read by someone else and it will show signs of wear and previous use. Overall we expect it to be in very good condition, but if you are not entirely satisfied please get in touch with us.