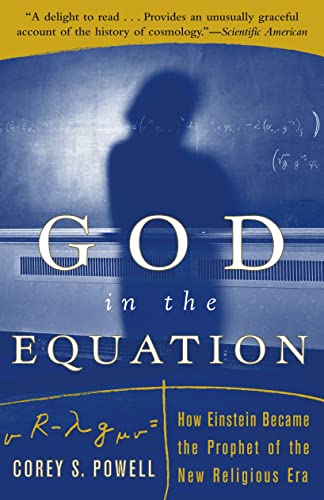 God in the Equation
by Corey Powell

God in the Equation Summary

God in the Equation: How Einstein Transformed Religion by Corey Powell

Corey Powell's riveting story explores how scientists try to explain more than the material universe. The initial idea was Einstein's 'fudge factor'. He called it his 'biggest blunder' and is known by scientists as the Greek letter Lambda. It was the first rigorous expression of this quest for something beyond the tangible. Cosmology, the attempt to explain our universe, its size, shape, beginning and end, has belonged to science for a century or so. And now it has reached a plateau, possibly its end point. There is some mopping up to be done understanding the nature of dark matter and dark energy. But dark matter and dark energy are now enshrined in scientific theory. Science has at last formulated a full-blown spiritual theory, a Church of Lambda. Powell contends that there is a God, the sum of the energies scattered through the universe. This god isn't so far from what Einstein called the 'Old One,' the strict Spinozan determinist who could not intervene in worldly affairs - but is inspiring and powerful. Corey Powell introduces readers to the god in the equations of modern cosmology, giving a fascinating insight into how the spiritual has guided cosmologists since Einstein.

God in the Equation Reviews

Scientific American A delight to read....Provides an unusually graceful account of the history of cosmology.
Carl Zimmer author of Evolution and Parasite Rex Powell is one of our finest science reporters....This is a book of eloquence and passion.
John Horgan author of The End of Science and The Undiscovered Mind A splendid, startling argument that the greatest religious issue of our time is actually a 'scientific' problem -- the quest to discover the mysterious energy that sparked cosmic creation and that may control our ultimate destiny.
Kirkus Reviews Provocative, securely grounded in contemporary theories of physics, and worth pondering.

Corey Powell is the News Editor at Discover magazine and a regular contributor. He has written for a variety of other publications including Scientific American and Newsday. He is an adjunct professor at New York University teaching a course on science writing. He graduated from Harvard in history and science.

One The God of Sci/Religion

Two How God Got a Job in Physics

Three The temple of Einstein Is Founded

Four The New priests Bicker in Europe and America

Seven Hisses from the Microwaves

Eight The Angel of Dark Energy

Nine Salvation in the temple of Einstein

GOR007769465
God in the Equation: How Einstein Transformed Religion by Corey Powell
Corey Powell
Used - Very Good
Paperback
Simon & Schuster
2003-10-01
288
0684863499
9780684863498
N/A
Book picture is for illustrative purposes only, actual binding, cover or edition may vary.
This is a used book - there is no escaping the fact it has been read by someone else and it will show signs of wear and previous use. Overall we expect it to be in very good condition, but if you are not entirely satisfied please get in touch with us.