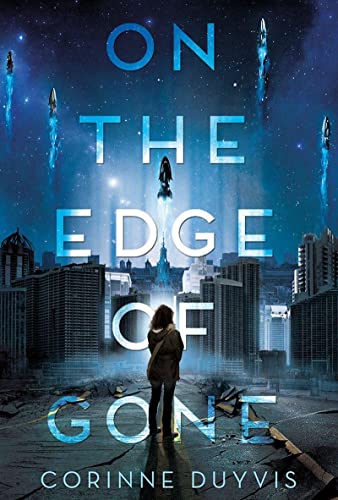 On the Edge of Gone
by Corinne Duyvis

Used Price
$22.99
inc. GST
Free Shipping in Australia
A young-adult novel about surviving the end of the world--but at what cost?--by the critically acclaimed author of Otherbound
Reviews:
Trustpilot
Very Good Good

On the Edge of Gone Summary

On the Edge of Gone by Corinne Duyvis

A thrilling, thought-provoking novel from one of young-adult literature's boldest new talents. January 29, 2035. That's the day the comet is scheduled to hit the big one. Denise and her mother and sister, Iris, have been assigned to a temporary shelter outside their hometown of Amsterdam to wait out the blast, but Iris is nowhere to be found and at the rate Denise's drug-addicted mother is going, they'll never reach the shelter in time. A last-minute meeting leads them to something better than a temporary shelter a generation ship, scheduled to leave Earth behind to colonize new worlds after the comet hits. But everyone on the ship has been chosen because of their usefulness. Denise is autistic and fears that she'll never be allowed to stay. Can she obtain a spot before the ship takes flight? What about her mother and sister? When the future of the human race is at stake, whose lives matter most?

Customer Reviews - On the Edge of Gone

On the Edge of Gone Reviews

**STARRED REVIEW**
"...what makes this a winner is the nerve-racking adventure. Life-affirming science fiction with spaceships, optimism in the apocalypse, and a diverse cast that reflects the real world." --Kirkus
***STARRED REVIEW***
"Insightful, suspenseful, and unsettling in its plausibility, this novel is sure to stick with readers long after the last page has been turned. VERDICT A high level of believability and excellent writing make this diverse apocalyptic novel a recommended selection for any young adult collection."--School Library Journal
**STARRED REVIEW**
"This novel offers an edge-of-your-seat survival plot and a compelling narrative. It subtly raises questions about the value of a human life without didacticism or easy answers, and the diverse cast, including a biracial heroine and characters of various races, religions, and sexualities, gives the novel real-world authenticity and impact. Duyvis deftly balances broader social elements with a powerful family story...A worthy readalike for North's Starglass, this near-future scifi will gain fans amongst those who want a story that is simultaneously heartbreaking and thought-provoking."--BCCB

Corinne Duyvis is a novelist and short story writer and an editor of the website Disability in Kidlit. She's a graduate of the Clarion West writer's workshop and lives in Amsterdam. Her first novel, Otherbound, received four starred reviews, and Horn Book called it "a humdinger of an adventure that contains the agony of loyalty, the allure of magic, and, most gratifyingly, the element of surprise." www.corinneduyvis.net.

GOR007892385
On the Edge of Gone by Corinne Duyvis
Corinne Duyvis
Used - Very Good
Hardback
Abrams
2016-03-08
464
1419719033
9781419719035
N/A
Book picture is for illustrative purposes only, actual binding, cover or edition may vary.
The book has been read, but looks new. The book cover has no visible wear, and the dust jacket is included if applicable. No missing or damaged pages, no tears, possible very minimal creasing, no underlining or highlighting of text, and no writing in the margins.