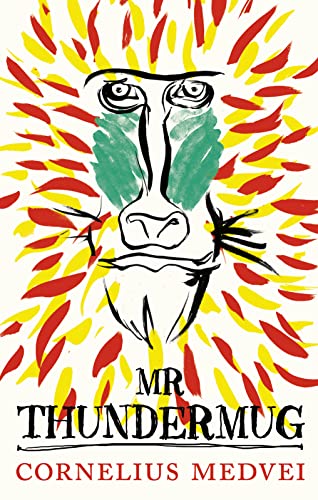 The charming, funny and whimsical tale of Mr Thundermug, the baboon who miraculously speaks a very proper English. Along with a collection of lithographs, this outlandish tale will take readers by surprise.

The charming, funny and whimsical tale of Mr Thundermug, the baboon who miraculously speaks a very proper English. Along with a collection of lithographs, this outlandish tale will take readers by surprise.

In a faraway city, a baboon has been found on the side of the street - perhaps not such a remarkable thing in those parts. But the oddity lies not in his being on the pavement, but in his powers of human speech. His English is impeccable, his grammar beyond reproach. As he becomes more and more involved in human affairs, Mr Thundermug, as he comes to be known, finds himself at a loss. What is he to make of his wife and children, who remain firmly rooted in the monkey world, unable to read or write? And what is he to make of humans, who have accused him of cruelty to animals (his wife sleeps in the bath of an old abandoned house) and who reproach him for wandering around naked?

In this surreal and touching tale - reminiscent of Edward Gorey - Cornelius Medvei brings us one of the most outlandish and unusual novellas of recent years. His lithographs delightfully illustrate this quirky little oddity.

`One might place this elegantly written take with anthropomorphic allegories such as Bulgakov's "The Heart of a Dog" or Kafka's "Metamorphosis"; it certainly teases our deep unease at the fine genetic lines dividing humans and apes. The whole thing might just be a curious flight of fancy; but it has the power to disturb, and perhaps that is enough.' Guardian

'Cornelius Medvei's novella is a magic-realist confection with a sly, wry sense of humour and a deft ear for the surreal and the inconsequential. This is certainly the most quirky, entertaining debut of the year so far.' Sunday Telegraph

'The shadow of Saki hangs heavily over Cornelius Medvei's entertaining debut novella. There is a great deal of humour in the tale, but also a sense of poignancy as Medvei skilfully conveys Mr Thundermug's isolation from his mute wife and children. Hauntingly illustrated with Medvei's own lithographs, this is a promising first work of fiction from a distinctive talent.' New Statesman

`What a colourful, glorious fantasy. I can't help believing that it's all true: Mr Thundermug is still out there somewhere.' Alexander Masters

Cornelius Medvei was born in 1977 and grew up in Suffolk and London. He studied French and German at Oxford and then went to China to work as a teacher. He was awarded an MA in Chinese from Sheffield University in 2002. Cornelius currently lives and works in London. As well as writing stories, he translates Chinese poetry, directs and produces short films, and teaches French and English as a foreign language at universities in and around London.

GOR002336019
Mr Thundermug by Cornelius Medvei
Cornelius Medvei
Used - Good
Hardback
HarperCollins Publishers
2006-08-07
96
0007228589
9780007228584
N/A
Book picture is for illustrative purposes only, actual binding, cover or edition may vary.
This is a used book - there is no escaping the fact it has been read by someone else and it will show signs of wear and previous use. Overall we expect it to be in very good condition, but if you are not entirely satisfied please get in touch with us.