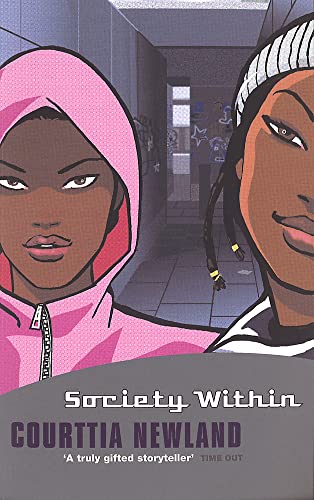 Society Within
by Courttia Newland

Society Within by Courttia Newland

SOCIETY WITHIN takes us back to the Greenside Estate, West London, scene of Courttia Newland's ground-breaking and hugely successful first novel, THE SCHOLAR. Newly arrived on the estate is Elisha: sweet, bright, sassy and just eighteen. As Elisha negotiates some new territory with more than fair share of dark corners, we take in the vividly interlocking lives of the other Greensiders: cool, ambitious Valerie, with some bad secrets to deal with; Little Stacey, looking for his first girl; Orin, dealing, stealing and trying to stay away from anything too lethal.

Courttia Newland tells gripping stories from real lives - stories of dreamers and fighters, love and revenge, friendship and betrayal - in a language burning with energy, originality and conviction.

Masterful ... Warm & witty ... an impressive achievement * GUARDIAN *
Consolidates his position as one of Britain's most important young black novelists ... a truly gifted storyteller * TIME OUT *
Fairly crackles with depictions of teenage temptations ... after the whitewash better known as NOTTING HILL, the antidote couldn't be better timed * i-D MAGAZINE *
Should have Irvine Welsh weeping into his overhyped beer * GLASGOW HERALD *
This is a real life story that comes with pain and dreams, friends and lovers, trust and betrayal and despair and hope * UNTOLD *
Pulls no punches in its description of estate life as a mixture of community and ghetto ... his strength lies in the depiction of violence and menace * INDEPENDENT *
Newland has a sharp curiosity that gives him both a maturity beyond his years and an energy that reinforces his youth * INDEPENDENT ON SUNDAY *
Plenty of local dialect, bags of intrigue and characters you've sat next to on the bus. Moreish * 19 *
"Young, gifted and black!" If the phrase hadn't already been kicking around for a few decades it would have been invented for Courttia Newland ... Newland has held up a mirror to a part of our society that many people, especially those in the literary world, would otherwise not know about - or would maybe like to forget about * TOUCH *

Courttia Newland is the twenty-five-year-old author of THE SCHOLAR. He has also contributed to various anthologies including DISCO 2000, NEW WRITERS 8, AFROBEAT and TEENAGE KICKS. Film rights to THE SCHOLAR have been optioned and he is working on the screenplay.

GOR002638618
Society Within by Courttia Newland
Courttia Newland
Used - Very Good
Paperback
Little, Brown Book Group
2000-09-15
320
0349111804
9780349111803
N/A
Book picture is for illustrative purposes only, actual binding, cover or edition may vary.
This is a used book - there is no escaping the fact it has been read by someone else and it will show signs of wear and previous use. Overall we expect it to be in very good condition, but if you are not entirely satisfied please get in touch with us.