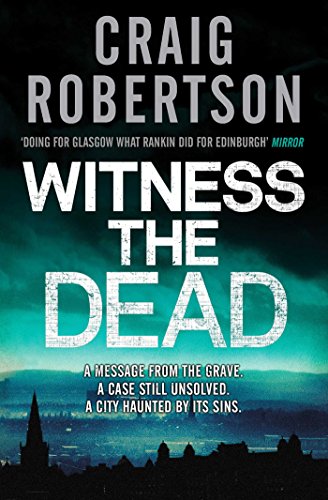 Witness the Dead
by Craig Robertson

Witness the Dead by Craig Robertson

FROM THE BESTSELLING AUTHOR OF RANDOM AND MURDERABILIA - DS Rachel Narey must bring a serial killer to justice.

Scotland 1972.Glasgow is haunted by a murderer nicknamed Red Silk - a feared serial killer who selects his victims in the city's nightclubs. The case remains unsolved but Archibald Atto, later imprisoned for other murders, is thought to be Red Silk.

In modern-day Glasgow, DS Rachel Narey is called to a gruesome crime scene at the city's Necropolis. The body of a young woman lies stretched out over a tomb. Her body bears a three-letter message from her killer.

Now retired, former detective Danny Neilson spots a link between the new murder and those he investigated in 1972 - details that no copycat killer could have known about. But Atto is still behind bars. Determined finally to crack the case, Danny, along with his nephew, police photographer Tony Winter, pays Atto a visit. But they soon discover that they are going to need the combined efforts of police forces past and present to bring a twisted killer to justice.

During his 20-year career with a Scottish Sunday newspaper, Craig Robertson interviewed three recent Prime Ministers; attended major stories including 9/11, Dunblane, the Omagh bombing and the disappearance of Madeleine McCann; beenwas pilloried on breakfast television, beat Oprah Winfrey to a major scoop, spent time on Death Row in the USA and dispensed polio drops in the backstreets of India. His debut novel, RANDOM, was shortlisted for the CWA New Blood Dagger and was a Sunday Times bestseller

GOR005336077
Witness the Dead by Craig Robertson
Craig Robertson
Used - Very Good
Paperback
Simon & Schuster Ltd
2013-11-21
544
0857204203
9780857204202
N/A
Book picture is for illustrative purposes only, actual binding, cover or edition may vary.
This is a used book. We do our best to provide good quality books for you to read, but there is no escaping the fact that it has been owned and read by someone else previously. Therefore it will show signs of wear and may be an ex library book.