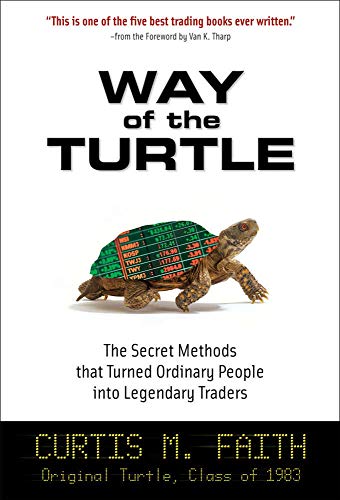 Way of the Turtle: The Secret Methods that Turned Ordinary People into Legendary Traders
by Curtis Faith

In Stock
$31.99
inc. GST
Explains the Turtle system - the rules, timing, risks, and rewards that can deliver better profits. This book also shows you how to use this system in the market - including how to select the right trades, smooth out returns, diversify, and know when to exit a winning trade.
Like New Very Good
Only 1 left

Way of the Turtle: The Secret Methods that Turned Ordinary People into Legendary Traders Summary

Way of the Turtle: The Secret Methods that Turned Ordinary People into Legendary Traders by Curtis Faith

"We're going to raise traders just like they raise turtles in Singapore."

So trading guru Richard Dennis reportedly said to his long-time friend William Eckhardt nearly 25 years ago. What started as a bet about whether great traders were born or made became a legendary trading experiment that, until now, has never been told in its entirety.

Way of the Turtle reveals, for the first time, the reasons for the success of the secretive trading system used by the group known as the "Turtles." Top-earningTurtle Curtis Faith lays bare the entire experiment, explaining how it was possible for Dennis and Eckhardt to recruit 23 ordinary people from all walks of life and train them to be extraordinary traders in just two weeks.

Only nineteen years old at the time-the youngest Turtle by far-Faith traded the largest account, making more than $30 million in just over four years. He takes you behind the scenes of the Turtle selection process and behind closed doors where the Turtles learned the lucrative trading strategies that enabled them to earn an average return of over 80 percent per year and profits of more than $100 million. You'll discover

Offering his unique perspective on the experience, Faith explains why the Turtle Way works in modern markets, and shares hard-earned wisdom on taking risks, choosing your own path, and learning from your mistakes.

McGraw-Hill authors represent the leading experts in their fields and are dedicated to improving the lives, careers, and interests of readers worldwide

Introduction: The Bet that Launched the Turtles

GOR008369003
Way of the Turtle: The Secret Methods that Turned Ordinary People into Legendary Traders by Curtis Faith
Curtis Faith
Used - Like New
Hardback
McGraw-Hill Education - Europe
2007-03-30
320
007148664X
9780071486644
N/A
Book picture is for illustrative purposes only, actual binding, cover or edition may vary.
This is a used book - there is no escaping the fact it has been read by someone else and it will show signs of wear and previous use. Overall we expect it to be in very good condition, but if you are not entirely satisfied please get in touch with us.