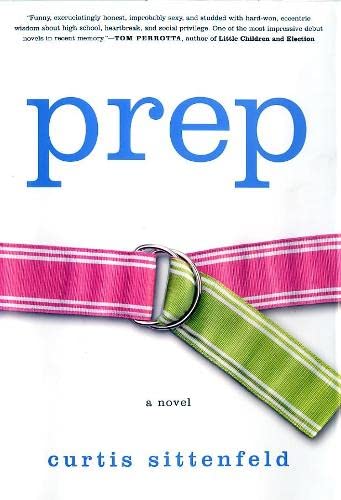 Curtis Sittenfeld's sparkling debut is set in an American boarding school, a hotbed of privilege, ambition and neurosis, every bit as snobbish and competitive as anything dreamed up on this side of the Atlantic. Lee Fiora is an intelligent, observant fourteen-year-old when her father drops her off at the prestigious Ault School in Massachusetts; she leaves behind her affectionate family in South Bend, Indiana, her head filled with images from the school's glossy brochure, in which boys in sweaters chat in front of old brick buildings, girls hold lacrosse sticks on pristine athletics fields, and everyone sings hymns in chapel.

As Lee soon learns, Ault is quite unlike anything she has previously experienced, a self-enclosed world populated by jaded teenagers whose expectations, values and social rituals are utterly unfamiliar to her. At first an observer of, then a participant in the hyper-vigilant, intricately demarcated life of the school, Lee eventually finds her own place in the pecking order - until a single act of spontaneous folly shatters her carefully honed identity.

Prep is a sharp and lucid portrait of the pain and the excitement of adolescence, and a remorseless dissection of privilege and class in the cradle of the American establishment.

"Curtis Sittenfeld is a young writer with a crazy amount of talent. Her sharp and economical prose reminds us of Joan Didion and Tobias Wolff. Like them, she has a sly and potent wit, which cuts unexpectedly-but often-through the placid surface of her prose. Her voice is strong and clear, her moral compass steady; I'd believe anything she told me."-Dave Eggers, author of "A Heartbreaking Work of Staggering Genius""Speaking in a voice as authentic as Salinger's Holden Caulfield and McCullers' Mick Kelly, Curtis Sittenfeld's Lee Fiora tells unsugared truths about adolescence, alienation, and the sociology of privilege. Prep's every sentence rings true. Sittenfeld is a rising star."-Wally Lamb, author of "She's Come Undone" and "I Know This Much Is True" "In her deeply involving first novel, Curtis Sittenfeld invites us inside the fearsome echo chamber of adolescent self-consciousness. But Prep is more than a coming of age story-it's a study of social class in America, and Sittenfeld renders it with astonishing deftness and clarity."-Jennifer Egan, author of "Look at Me" "Sittenfeld ensconces the reader deep in the world of the Ault School and the churning mind of Lee Fiora (a teenager as complex and nuanced as those of Salinger), capturing every vicissitude of her life with the precision of a brilliant documentary and the delicacy and strength of a poem."-Thisbe Nissen, author of "Osprey Island" "Open Prep and you'll travel back in time: Sittenfeld's novel is funny, smart, poignant, and tightly woven together, with a very appealing sense of melancholy."-Jill A. Davis, author of "Girls' Poker Night""Prep does something considerable in therealm of discussing class in American culture. The ethnography on adolescence is done in pitch-perfect detail. Stunning and lucid."-Matthew Klam, author of "Sam the Cat" Funny, excruciatingly honest, improbably sexy, and studded with hard-won, eccentric wisdom about high school, heartbreak, and social privilege. One of the most impressive debut novels in recent memory."-Tom Perrotta, author of "Little Children" and "Election" "From the Hardcover edition."

Curtis Sittenfeld was born in 1976. She lives in Washington DC. Her novels include Prep and The Man of My Dreams.

GOR001787871
Prep by Curtis Sittenfeld
Curtis Sittenfeld
Used - Very Good
Hardback
Pan Macmillan
2005-08-01
416
0330441264
9780330441261
N/A
Book picture is for illustrative purposes only, actual binding, cover or edition may vary.
This is a used book - there is no escaping the fact it has been read by someone else and it will show signs of wear and previous use. Overall we expect it to be in very good condition, but if you are not entirely satisfied please get in touch with us.