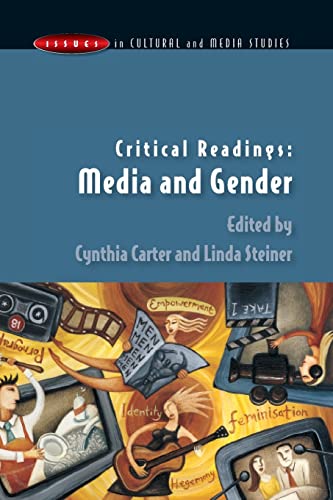 Out of Stock
$20.49
inc. GST
Provides an introduction to the field of media and gender research. This book explore subjects such as: entertainment, news, grassroots communication, media texts, institutions and audiences. It includes: gender identity and television talk shows; historical portrayals of women in advertising; and, the sexualization of the popular press.
Very Good
Only 0 left

Critical Readings: Media and Gender provides a lively and engaging introduction to the field of media and gender research, drawing from a wide range of important international scholarship. A variety of conceptual and methodological approaches is used to explore subjects such as: entertainment; news; grassroots communication; new media texts; institutions; audiences. Topics include:

This book is ideal for undergraduate courses in cultural and media studies, gender studies, the sociology of the media, mass communication, journalism, communication studies and politics.

Cynthia Carter is Lecturer in Journalism, Media and Cultural Studies at Cardiff University, UK. Her previous books include Violence and the Media (Open University Press, 2003), Environmental Risks and the Media (2000) and News, Gender and Power (1998). She is co-editor of the journal Feminist Media Studies .

Linda Steiner is Associate Professor in Journalism and Media Studies at Rutgers, The State University of New Jersey, USA. She is editor of Critical Studies in Media Communication , serves on six journal editorial boards, and has written 30 journal articles and book chapters on feminist media, mediaethics, and journalism history. She is co-author of the forthcoming book The History of Women in Journalism in the US and UK (2994).

PART I: TEXTS IN CONTEXT

4.The Politics of the Smile: `Soft News' and the Sexualization of the Popular Press
Patricia Holland

7.Pretty Tough: The Cult of Femininity in Women's Magazines
Sherrie A. Inness

9.The Great Rock and Roll Swindle: The Representation of Women in the British Rock Music Press
Helen Davies

11.The Commercialization of Masculinities: From the 'New Man' to the 'New Lad'
John Beynon

12.Women and the Internet: The Natural History of a Research Project
Anne Scott, Lesley Semmens and Lynette Willoughby

16.Freud vs Women: The Popularization of Therapy on Daytime Talk Shows
Jane Shattuc

16.What Girls Want: The Intersections of Leisure and Power in Female Computer Game Play
Heather Gilmour

GOR004479486
Critical Readings: Media and Gender by Cynthia Carter
Cynthia Carter
Used - Very Good
Paperback
Open University Press
2003-12-01
384
033521097X
9780335210978
N/A
Book picture is for illustrative purposes only, actual binding, cover or edition may vary.
This is a used book - there is no escaping the fact it has been read by someone else and it will show signs of wear and previous use. Overall we expect it to be in very good condition, but if you are not entirely satisfied please get in touch with us.