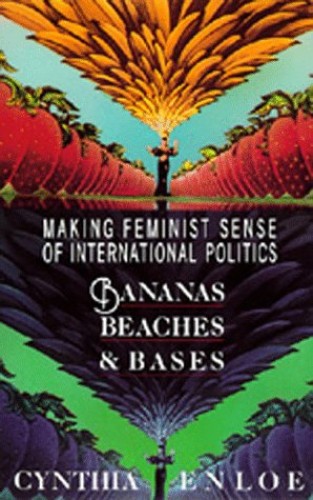 Out of Stock
$95.99
inc. GST
Offers an analysis of international politics revealing the crucial role of women in implementing governmental foreign policies. This book shows how thousands of women tailor their marriages to fit the demands of state secrecy; and how foreign policy would grind to a halt without secretaries to handle money transfers or arms shipments.
Very Good
Only 0 left

This radical new analysis of international politics reveals the crucial role of women in implementing governmental foreign policies, be it Soviet Glasnost, Britain's dealings in the EEC, or the NATO alliance. Cynthia Enloe pulls back the curtain on the familiar scenes - governments restricting imported goods, bankers negotiating foreign loans, soldiers serving overseas - and shows that the real landscape is less exclusively male. "Bananas, Beaches and Bases" shows how thousands of women tailor their marriages to fit the demands of state secrecy; how foreign policy would grind to a halt without secretaries to handle money transfers or arms shipments; and how women are working in hotels and factories around the world in order to service their governments' debts. Enloe also challenges common assumptions about what constitutes "international politics."She explains, for example, how turning tacos and sushi into bland fast foods affects relations between affluent and developing countries, and why a multinational banana company needs the brothel outside its gates. And she argues that shopping at Benneton, wearing Levis, working as a nanny (or employing one) or planning a vacation are all examples of foreign policy in action. Bananas, Beaches and Bases does not ignore our curiosity about arms dealers, the President's men or official secrets. But it shows why these conventional clues are not sufficient for understanding how the international political system works. In exposing policymakers' reliance on false notions of "feminity" and "masculinity," Enloe dismantles a seemingly overwhelming world system, exposing it to be much more fragile and open to change than we are usually led to believe.

"A major contribution to existing perspectives in international relations. Through the author's survey of common and uncommon topics, . . . she has broadened the field of international relations beyond its exclusively masculine focus. . . . Enloe's analysis is not only a timely contribution but also entertaining reading, which is a welcome addition to supplement the usual dry textbooks in the field."--"Journal of the History of Sexuality

Cynthia Enloe is Professor of Government and International Relations at Clark University and is the author of many books, including Does Khaki Become You? The Militarization of Women's Lives and Ethnic Soldiers: State Security in Divided Societies.
Cynthia Enloe won the Howard Zinn Lifetime Achievement in Peace Studies Award from the Peace and Justice Studies Association (PJSA).

GOR003036927
Bananas, Beaches and Bases: Making Feminist Sense of International Politics by Cynthia Enloe
Cynthia Enloe
Used - Very Good
Paperback
University of California Press
1990-01-11
280
0520069854
9780520069855
N/A
Book picture is for illustrative purposes only, actual binding, cover or edition may vary.
This is a used book - there is no escaping the fact it has been read by someone else and it will show signs of wear and previous use. Overall we expect it to be in very good condition, but if you are not entirely satisfied please get in touch with us.