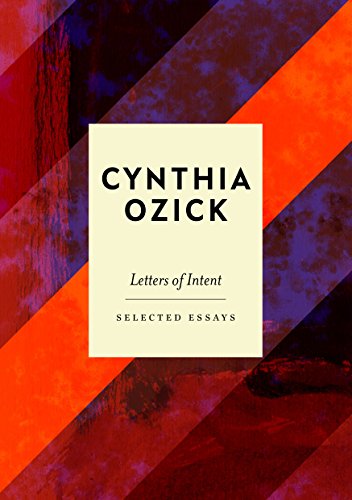 Letters of Intent
by Cynthia Ozick

'What we ought to do, as writers, is seize freedom now, immediately, by recognizing that we already have it.'

Cynthia Ozick, one of 'the greatest living American writers', has, over a lifetime of observation, produced some of the sharpest and most influential works of criticism in contemporary Anglo-American writing. Described as the 'Emily Dickinson of the Bronx' and 'one of the most accomplished and graceful literary stylists of her time', her acclaimed works span topics from Henry James to Helen Keller, and from Christian Heroism to lovesickness.

The essays selected here come from the six volumes Ozick published in the USA over the last thirty-three years. Collected by David Miller, Ozick's friend and agent, they represent the diversity, curiosity, originality, and crackling wit of her works. A volume to treasure, to re-read and to relish, this is Cynthia Ozick, 'the Athena of America's literary pantheon', at her very best.

It's not unlike falling in love, reading the essays of Cynthia Ozick. Here is a mind as gentle and fierce all at once... A mind that embodies literature's finest potential. * Los Angeles Times *
Even when you disagree with her, she electrifies your mind. * New York Times *
Splendid... Ozick relies on sensibility and intelligence to make their own way in the world... lyric grace under intellectual pressure gives her news its staying power. Her essays invite our admiration even as they challenge us to talk back. -- David Lehman
As an essayist, Cynthia Ozick is a very good storyteller. Her arguments are plots... they twist and turn, digress, slow down and speed up, surprise with sudden illuminations.... She likes to spin and sparkle... * The New York Times Book Review *
She is a writer innately drawn to paradox, and to the moral questions inherent in the relationships between richness and poverty, mind and body, history and imagination... In everything Ozick writes, she regards the land of the free with the head-shaking disbelief of someone who knows. -- Ali Smith * Guardian *
No American writer working today is more distinctive in everything she does on the page. * PEN/Malamud Award *
Ozick is razor sharp as she dissects art, religion and the distinction between literary and popular fiction * Observer *

Cynthia Ozick is the author of numerous acclaimed works of fiction and nonfiction. She is a recipient of the National Book Critics Circle Award and was a finalist for the Pulitzer Prize and the Man Booker International Prize. Her stories have won four O. Henry first prizes and, in 2012, her novel Foreign Bodies was shortlisted for the Orange Prize for Fiction. She was born in 1928 and currently lives in New York.

GOR008231196
Letters of Intent: Selected Essays by Cynthia Ozick
Cynthia Ozick
Used - Very Good
Hardback
Atlantic Books
2017-01-04
592
1786491079
9781786491077
N/A
Book picture is for illustrative purposes only, actual binding, cover or edition may vary.
This is a used book - there is no escaping the fact it has been read by someone else and it will show signs of wear and previous use. Overall we expect it to be in very good condition, but if you are not entirely satisfied please get in touch with us.