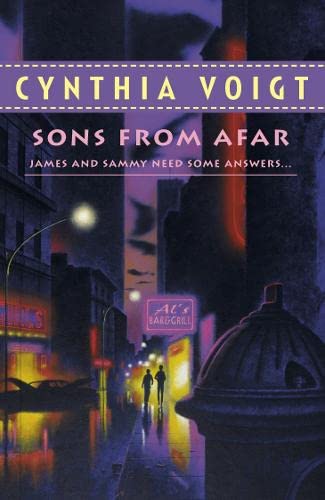 Sons From Afar
by Cynthia Voigt

The sixth book in Cynthia Voigt's acclaimed Tillerman Series, about Dicey Tillerman and her family, where Dicey's brothers Sam and James hunt for their father.

The sixth book in Cynthia Voigt's acclaimed Tillerman Series, about Dicey Tillerman and her family, where Dicey's brothers Sam and James hunt for their father.

Six years have passed since James and Sammy Tillerman came with their sisters Dicey and Maybeth to live with their grandmother. They have grown up as very different individuals - James, the shy intellectual dreamer at 15, and Sammy, 12, the handsome, boisterous doer of the family. James begins to ask questions about their father. Who was he? Why did he leave? He and Sammy begin a quest to track their father down, through the streets of Annapolis and among the seedy dockside bars of Baltimore, and learn more about themselves in consequence.

A strong, emotional story about young adults discovering who they are and what they are capable of. It builds on characters already loved and admired from the first book in the Tillerman series, Homecoming.

"The Tillerman series... is a tour de force"
The Guardian

Cynthia Voigt, winner of the Newbery Medal, was born in Boston in 1942. For a number of years she taught English and Classics. She is married with one daughter and one son.

GOR001853106
Sons From Afar (Tillerman Series, Book 6) by Cynthia Voigt
Cynthia Voigt
Tillerman Series
Used - Very Good
Paperback
HarperCollins Publishers
2000-12-04
384
0007100663
9780007100668
N/A
Book picture is for illustrative purposes only, actual binding, cover or edition may vary.
This is a used book - there is no escaping the fact it has been read by someone else and it will show signs of wear and previous use. Overall we expect it to be in very good condition, but if you are not entirely satisfied please get in touch with us.