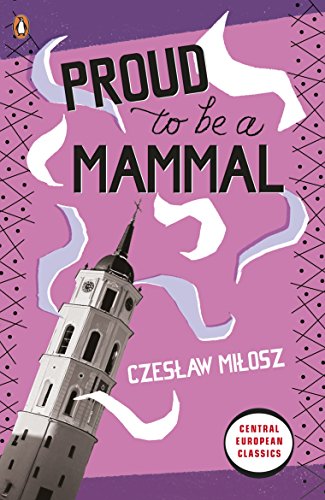 Proud To Be A Mammal
by Czeslaw Milosz

Out of Stock
$19.49
inc. GST
Offers a collection of essays that covers the author's passion for poetry, his love of the Polish language that was so nearly wiped out by the violence of the twentieth century, and his happy childhood.
Like New
Only 0 left

Proud To Be A Mammal Summary

Proud To Be A Mammal by Czeslaw Milosz

Proud to be a Mammal (1942-97) is Czeslaw Milosz's moving and diverse collection of essays. Among them, he covers his passion for poetry, his love of the Polish language that was so nearly wiped out by the violence of the twentieth century, and his happy childhood. Milosz also includes a letter to his friend in which he voices his concern about the growing indifference to murder and the true value of freedom of thought, as well as a verbal map of Wilno, with each street revealing both a rich local history and intricate, poignant personal memories.

Proud To Be A Mammal Reviews

Bears witness to Milosz'z lifetime of toil in the fields of memory, faith and art * Bookforum *
[The series] sheds remarkable light on the literature, culture and politics of the region...anyone coming fresh to the field will be captivated by the richness, variety, humour and pathos of a classic literature that, through a shared historical experience, transcends national and linguistic boundaries. -- CJ Schuler * Independent on Sunday *
This [series] is a wonderful idea ... They are absurdist parables, by turns hilarious, unsettling and enigmatic. -- Nicholas Lezard * Guardian *
I urge you to go and read them. -- Adam Thirlwell * New Statesman *
This new series of Central European Classics is important well beyond simply providing 'good reads'. -- Stephen Vizinczey * Daily Telegraph *

Czeslaw Milosz (1911-2004) won the Nobel Prize for Literature in 1980. Born in Lithuania while it was still part of the Russian Empire, he lived much of his life in Poland or exiled in California. He was the author of one of the definitive books on totalitarianism, The Captive Mind, but also wrote with extraordinary vividness and moral authority on his childhood, his experiences under Nazism and on the tragedy of Central Europe.

GOR010425517
Proud To Be A Mammal by Czeslaw Milosz
Czeslaw Milosz
Penguin Modern Classics
Used - Like New
Paperback
Penguin Books Ltd
2010-05-06
304
0141193190
9780141193199
N/A
Book picture is for illustrative purposes only, actual binding, cover or edition may vary.
The book has been read, but looks new. The book cover has no visible wear, and the dust jacket is included if applicable. No missing or damaged pages, no tears, possible very minimal creasing, no underlining or highlighting of text, and no writing in the margins.