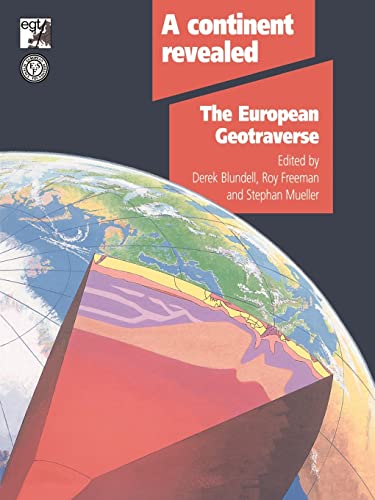 In Stock
$37.99
inc. GST
A Continent Revealed presents the findings of the European Geotraverse (EGT) - a unique study of the tectonic evolution of the continent of Europe and the first comprehensive cross section of the continental lithosphere.
Very Good
Only 2 left

A Continent Revealed presents the findings of the European Geotraverse (EGT), - a unique study of the tectonic evolution of the continent of Europe, and the first comprehensive cross section of the continental lithosphere. A well-illustrated book and a set of maps and profiles have been put together by key workers in the EGT project to present the great wealth of information yielded by the project. The book outlines the scientific achievements of the European Geotraverse. It tells how the information now available is key evidence in the piecing together of the tectonic evolution of the European continent. The authors have reviewed the work of their colleagues to unravel the nature, evolution and dynamics of the European lithosphere. The stimulating study reveals much of the workings of the earth and the processes that shaped the continent of Europe as we see it today. The maps and profiles, along a 250 kilometre wide swath stretching 4600 kilometres from Scandinavia to the Mediterranean, form a three dimensional picture of the structure, properties and composition of the continental lithosphere of Europe in an atlas format. Many of the data are also presented on an accompanying compact disk. The book completes the boxed set, and is also available on its own in paperback. The EGT project has filled many gaps in our knowledge of the lithosphere, and is a celebration of coordination and communication across geographical borders and between disciplines. This book tells the story of international collaboration on an unprecedented scale, by several hundred geoscientists in a series of well-defined international projects.

'There are many good things to say about this book. It is beautifully produced. The figures and maps are clearly drawn ... The whole book is astonishingly coherent.' Journal of Structural Geology
' ... an authoritative account ... will be of benefit to a wide range of readers from those with a general interest in physical geography of Europe to those researching the subject in depth.' The Geographical Journal
' ... this is a successful presentation of an ambitious continent-wide project of outstanding merit. I am astonished at the value offered not least for the huge amount of data provided. I fully expect this to be a best seller - it certainly deserves to be.' Episodes Vol 16 No 3
"The maps are monuments to careful scientific cartography: They are clearly drawn, beautifully colored, and filled with useful information....An essential addition to any library used by advanced undergraduate and graduate geology students, faculty, and professionals." M.A. Wilson, Choice
"One of the most ambitious projects in the earth sciences bears fruit in this impressive multiauthored book." M.A. Wilson, Choice
"...a publishing tour de force....What makes A Continent Revealed special is the editors' acievement in summarizing a huge amount of primary scientific literature at a level accessible to an advanced undergraduate, and successfully melding the contributions of an additional dozen authors into a single narrative. This part of the package is available separately and will undoubtedly find use as a textbook; but in an attempt to give readers the same opportunity as the authors to interpret the database and to confront the scientific problems, the boxed set also contains 14 maps at a uniform scale of 1:2.5 million, a description of the data compiled in these maps and a CD-ROM containing some of the digital information incorporated into the maps....[T]he paper and digital databases already turn the textbook into a reference volume essential to any European geoscientist interested in the big picture." Simon Klemperer, Nature
"...incontestably improves our knowledge of the European continent." Pierre Choukroune, Science
"...a wealth of information...this text sets the pace for the future..."' Geophysics
"...'WOW'..different and outstanding...includes a marvelous synthesis but also an astonishing wealth of data..required reading for any geologist who plans a trip to Europe. This book would even be the ideal basis for a course on the regional geology of Europe...a starting point for further work, geologic thinking, and research activities in Europe...an indispensable work that should be available in every geology library and every lab." Hermann W. Pfefferkorn, Journal of Geologic Education
"...a very impressive publication that provides the results of the EGT in a manner that is useful to geoscientists at all levels. By providing an encyclopedic picture of the data and current models in a single publication, A Continent Revealed makes an extremely effective contribution to all those who are interested in the evolution of continental lithosphere in general....Overall, A Continent Revealed is an outstanding resource for anyone interested in the origin and evolution of continental lithosphere and is particularly valuable for those engaged in understanding the pre-Mesozoic tectonic evolution of the earth, when geological history must be deciphered from the complex record in continental lithosphere." Terry J. Wilson, Geochimica et Cosmochimica Acta

1. The reason for the European Geotraverse; 2. Mobile Europe; 3. The seismic structural framework of Europe; 4. Structure and physical properties of the lithosphere in Europe; 5. Recent activity in the lithosphere of Europe; 6. The tectonic evolution of Europe; 7. Lithosphere dynamics and evolution.

GOR006947154
A Continent Revealed: The European Geotraverse, Structure and Dynamic Evolution by D. J. Blundell
D. J. Blundell
Used - Very Good
Paperback
Cambridge University Press
1992-11-27
288
052142948X
9780521429481
N/A
Book picture is for illustrative purposes only, actual binding, cover or edition may vary.
This is a used book - there is no escaping the fact it has been read by someone else and it will show signs of wear and previous use. Overall we expect it to be in very good condition, but if you are not entirely satisfied please get in touch with us.