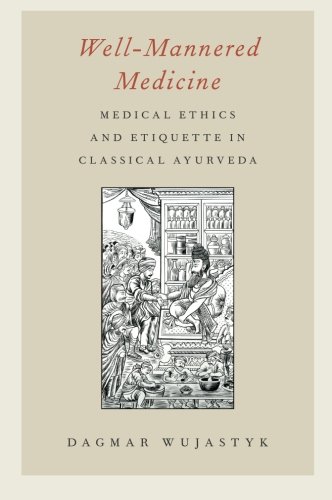 Out of Stock
$61.99
inc. GST
Dagmar Wujastyk explores the moral discourses on the practice of medicine in the foundational texts of Ayurveda, showing how these works testify to an elaborate system of medical ethics and etiquette.
Well Read
Only 0 left

Dagmar Wujastyk explores the moral discourses on the practice of medicine in the foundational texts of Ayurveda. The classical ayurvedic treatises were composed in Sanskrit between the first and the fifth centuries CE, and the later works, dating into the sixteenth century CE, were still considered strongly authoritative. As Wujastyk shows, these works testify to an elaborate system of medical ethics and etiquette. Physicians looked to the ayurvedic treatises for a guide to professional conduct. Ayurvedic discourses on good medical practice depict the physician as highly-educated, skilled, moral, and well-mannered. The rules of conduct positioned physicians within mainstream society's and characterized medical practice as a trustworthy and socially acceptable profession. At the same time, professional success was largely based on a particular physician's ability to cure his patients. This resulted in tension, as some treatments and medications were considered socially or religiously unacceptable. Doctors needed to treat their patients successfully while ostensibly following the rules of acceptable behavior. Wujastyk offers insight into the many unorthodox methods of avoiding conflict while ensuring patient compliance shown in the ayurvedic treatises, giving a disarmingly candid perspective on the realities of medical practice and its crucial role in a profoundly well-mannered society.

In Well-Mannered Medicine, Dagmar Wujastyk has crafted an intelligent and insightful take on the ethical terrain covered by the Ayurvedic medical tradition ... Wujastyk's skill as a reader of ancient texts and of modern temperament distinguishes this work from other contemporary takes on Ayurveda ... It is a remarkable and elegant read, thoughtful at every turn, and unrelentingly learned. * Rachel Berger, Asian Medicine *
Dagmar Wujastyk's thorough study of medical ethics in classical Ayurvedic texts adds substantially to our knowledge of Ayurveda as a medical system. Ethics here includes the moral attributes required of a physician, personal presentation, medical education, the doctor-patient relationship, medical deception, and much more. In this first rate study, Wujastyk avoids the danger of evaluating Ayurveda from the standpoint of Western medicine. This is required reading for everyone with an interest in Indian medicine or cross-cultural medical history. * Frederick M. Smith, Professor of Sanskrit and Classical Indian Religions, University of Iowa *

GOR010188760
Well-Mannered Medicine: Medical Ethics and Etiquette in Classical Ayurveda by Dagmar Wujastyk (PhD in Indology 2010, Bonn University)
Dagmar Wujastyk (PhD in Indology 2010, Bonn University)
Used - Well Read
Paperback
Oxford University Press Inc
2012-08-16
264
0199859965
9780199859962
N/A
Book picture is for illustrative purposes only, actual binding, cover or edition may vary.
This is a used book - there is no escaping the fact it has been read by someone else and it will show signs of wear and previous use. Overall we expect it to be in very good condition, but if you are not entirely satisfied please get in touch with us.