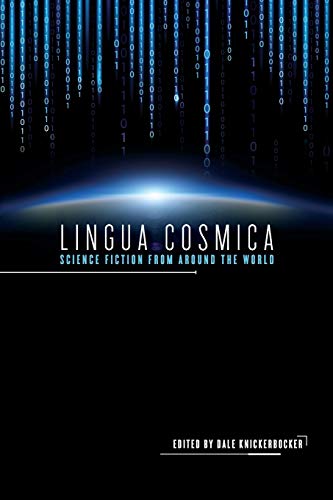 Lingua Cosmica: Science Fiction from around the World by Dale Knickerbocker

"Comprising contributions by recognized critics, Lingua Cosmica is an excellent addition to the current scholarship on non-Anglo-American sf." --Science Fiction Studies
"Lingua Cosmica is a vital and much-needed resource for people interested in world sf and what is or is not in English." --SFRA Review
"If you're looking for excellent scholarship on 'global' science fiction, Lingua Cosmica should be your top choice. Its offers very perceptive essays on a broad variety of non-Anglo-American SF authors and cineastes written by some of the most respected experts in the field."--Arthur Evans, editor of Vintage Visions: Essays on Early Science Fiction

"Knickerbocker has done a service with this collection of essays not only to fans of science fiction eager to explore new frontiers, but perhaps more importantly to academic at large, which historically has been reluctant to embrace speculative fiction as a serious subject of scholarly study." --Studies in 20th & 21st Century Literature
"Lingua Cosmica represents an important step forward for the study of international science fiction . . . because of its indisputable success at its major goal of better familiarizing an English-speaking audience with these authors and filmmakers." --Fafnir - Nordic Journal of Science Fiction and Fantasy Research

Dale Knickerbocker is Distinguished Professor of Foreign Languages and Literatures at East Carolina University. He is the author of Juan Jose Millas: The Obsessive-Compulsive Aesthetic .

GOR010827813
Lingua Cosmica: Science Fiction from around the World by Dale Knickerbocker
Dale Knickerbocker
Used - Very Good
Paperback
University of Illinois Press
2018-05-04
262
0252083377
9780252083372
N/A
Book picture is for illustrative purposes only, actual binding, cover or edition may vary.
This is a used book - there is no escaping the fact it has been read by someone else and it will show signs of wear and previous use. Overall we expect it to be in very good condition, but if you are not entirely satisfied please get in touch with us.