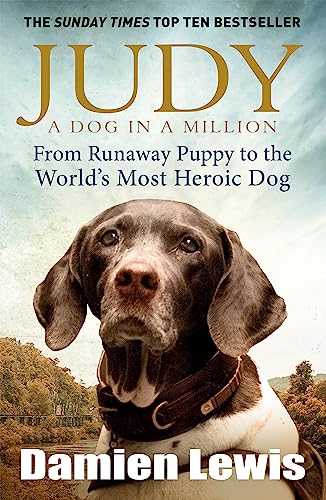 Judy: A Dog in a Million
by Damien Lewis

Judy: A Dog in a Million Summary

Judy: A Dog in a Million: From Runaway Puppy to the World's Most Heroic Dog by Damien Lewis

The impossibly moving story of how Judy, World War Two's only animal POW, brought hope in the midst of hell.

Judy, a beautiful liver and white English pointer, and the only animal POW of WWII, truly was a dog in a million, cherished and adored by the British, Australian, American and other Allied servicemen who fought to survive alongside her.

Viewed largely as human by those who shared her extraordinary life, Judy's uncanny ability to sense danger, matched with her quick-thinking and impossible daring saved countless lives. She was a close companion to men who became like a family to her, sharing in both the tragedies and joys they faced. It was in recognition of the extraordinary friendship and protection she offered amidst the unforgiving and savage environment of a Japanese prison camp in Indonesia that she gained her formal status as a POW.

Judy's unique combination of courage, kindness and fun repaid that honour a thousand times over and her incredible story is one of the most heartwarming and inspiring tales you will ever read.

Judy: A Dog in a Million Reviews

GOR006684422
Judy: A Dog in a Million: From Runaway Puppy to the World's Most Heroic Dog by Damien Lewis
Damien Lewis
Used - Very Good
Paperback
Quercus Publishing
2015-05-07
384
1848665385
9781848665385
N/A
Book picture is for illustrative purposes only, actual binding, cover or edition may vary.
This is a used book - there is no escaping the fact it has been read by someone else and it will show signs of wear and previous use. Overall we expect it to be in very good condition, but if you are not entirely satisfied please get in touch with us.