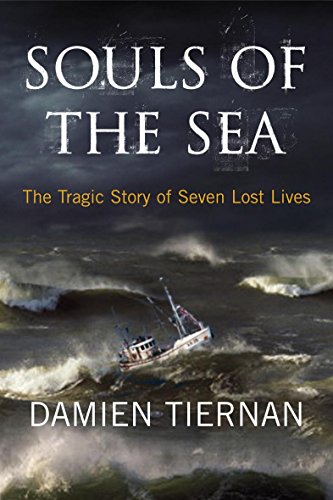 Souls of the Sea
by Damien Tiernan

In Stock
$17.99
inc. GST
In January 2007, in the space of six days, three fishing boats sank off the coast of Ireland. Seven men were claimed by the sea, four survived. Five died on one boat, the Pere Charles. Divers from the Irish navy managed to get down, but there was no sign of the five men. This is a story of heartache, of loss, of love departed that has no grave.
Very Good Good
Only 3 left

Souls of the Sea Summary

Souls of the Sea by Damien Tiernan

In January 2007, in the space of six days, three large fishing boats sank off the south east coast of Ireland. Seven men were claimed by the sea, four survived. Five died together on one boat, the Pere Charles, which sank on Wednesday evening, January 10th, two and a half miles from the village of Dunmore East. A few hours later, two men were lost when the Honey Dew II sank 21 miles away off Minehead while two other crew members somehow survived for 20 hours in a small life-raft, tossed about in a raging sea.

Divers from the Irish navy managed to get down to the Pere Charles a week after she sank, but were unable to get inside due to currents, debris and loose netting. It would be another week before these brave men were able to get into the stricken vessel which is still lying 35 metres below the surface. To everybody's amazement, there was no sign of the five men inside. And even more amazingly, most of the fish was gone. The boat was searched thoroughly in very dangerous conditions, but only a pair of oilskins was recovered. The men were gone. Their bodies were gone. The fish - up to 50 tonnes of herring - was gone.

Off Minehead and along the west Waterford coastline, trawlers scanned the seabed for any sonar sighting of the sunken vessel, the Honey Dew II. Eventually, she too was located. Divers from the Garda Underwater Unit went down. Again, no sign of the two men missing.
This is a story of heartache, of loss, of love departed that has no grave. This is the story of courage, strength and community bound together.

Damien Tiernan is a reporter for RTE, the Irish National Broadcaster

GOR001512627
Souls of the Sea by Damien Tiernan
Damien Tiernan
Used - Very Good
Paperback
Hachette Books Ireland
2007-10-25
256
0340952512
9780340952511
N/A
Book picture is for illustrative purposes only, actual binding, cover or edition may vary.
This is a used book - there is no escaping the fact it has been read by someone else and it will show signs of wear and previous use. Overall we expect it to be in very good condition, but if you are not entirely satisfied please get in touch with us.