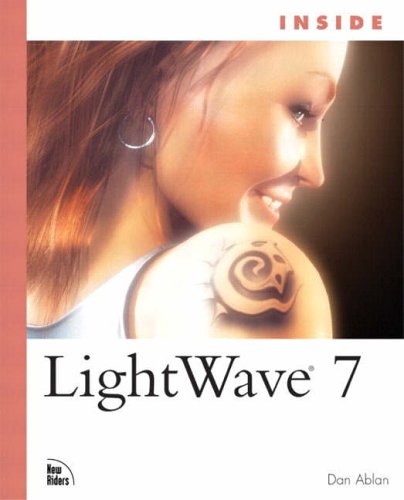 Inside LightWave 7
by Dan Ablan

Inside LightWave 7 by Dan Ablan

Inside LightWave 7 is designed for the intermediate to advanced 3D artist/animator who is looking to improve his or her skills and efficiency using LightWave.

Inside LightWave 7 takes the reader beyond their basic knowledge of the features of LW to learn how to apply their knowledge to create professional-level scenes and animations. Inspirational graphics combined with real-world tutorials and insider tips make Inside LightWave 7 a must-have for every LightWave user.

Dan Ablan is president of AGA Digital Studios, Inc., a 3D animation company in the Chicago area. AGA has produced 3D animation for broadcast, corporate, and architectural clients since 1994, as well as post-production services. Dan holds a B.A. in broadcast journalism from Valparaiso University, with a minor concentration in photojournalism. He is the author of four best-selling international LightWave 3D books from New Riders Publishing: LightWave Power Guide (v5.0), Inside LightWave 3D (v5.5), Inside LightWave 6, and LightWave 6.5 Effects Magic. He has released an on-going series of LightWave training videos through Christie Entertainment (http://www.classondemand.net) and has written columns and articles for LightWave Pro magazine, Video Toaster User magazine, 3D Design magazine, 3D World magazine, and NewTek Pro magazine. In addition, Dan was Technical Editor for Jeremy Birn's Digital Lighting & Rendering from New Riders Publishing. Dan has been teaching LightWave seminars across the country, since 1995 including at AGA Digital Studios, Inc., an authorized NewTek LightWave training facility. Visit http://www.danablan.com and http://www.agadigital.com.

For the past seven years, Jarrod Davis has spent almost every waking moment slaving away at the computer, constantly trying to improve his skills in 3D animation and effects. And what has it gotten him? A fantastic job at Foundation Imaging working on shows, such as Roughnecks, Max Steel, and Dan Dare, nationwide commercials, and the fulfillment of his dream to work on Star Trek. With the support of his wonderful fiancee?herself an aspiring animator?he intends to proceed with his plans to conquer the world...when he gets some free time. Jarrod Davis is affectionately known as J-Rod. Jarrod authored Chapters 14, "Expression Applications," and 15, "Animation with Expression."

Stuart Aitken is currently head of 3D at Axis animation?a company he co-founded along with several colleagues in 1999 with the aim of eventual total world domination of the 3D CG industry. Although often plagued by the lingering notion he really should be somewhere else by now, he still lives and works amid the gritty iron and sandstone landscape of Glasgow, Scotland. Stuart has been using LightWave for nigh on seven years now and amazingly still isn't bored. His particular emphasis is on organic 3D modeling, texturing, character setup, and expanding waistlines. Stuart created the cover image for Inside LightWave 6 and 7, and he authored Chapter 10, "Organic Modeling," for Inside LightWave 6. That chapter has been updated for LightWave 7.

Randy Sharp is currently a 3D animator at Digital Domain in California. He spent two and a half years at Foundation Imaging working on a number of productions, and was a supervising modeler for his last year there. Prior to working at Foundation Imaging, Randy worked at Applied Materials for 10 years, leaving as a manufacturing engineer. Randy authored Chapter 8, "Architectural Environments." There are many people that Randy could thank for the opportunities he's been given, but none of it would have happened without the love and support of his wife, Kathleen. Spending countless hours behind a computer monitor is hard, but having someone that supports him in every way imaginable is what gives him the strength to do it. Without her, Randy says, he would never have had the success and opportunities he has enjoyed. Randy would like to say thanks to Kathleen for helping him realize a dream.

Bob Cazzell holds a degree in electronic engineering and is the chief information officer for REZN8 Productions, Inc., an Emmy Award-winning graphic design, animation, and visual effects studio in Hollywood. Bob has been fooling around with computer graphics since the early 1990s and joined REZN8 in 1997 when he decided that the healthcare industry was not a fun and exciting career choice. He also thinks Bugs and Daffy are the greatest comedy duo in history. Bob supplied the technical references located at the end of Appendix B, "Lightwave 7 Plug-in, Tool, and Technical List.

I. GETTING STARTED WITH LIGHTWAVE 7.

II. A PROJECT-BASED APPROACH TO CREATING AND BUILDING 3D SCENES.

GOR004557593
Inside LightWave 7 by Dan Ablan
Dan Ablan
Used - Very Good
Hardback
Pearson Education (US)
2001-12-28
1200
0735711348
9780735711341
N/A
Book picture is for illustrative purposes only, actual binding, cover or edition may vary.
This is a used book - there is no escaping the fact it has been read by someone else and it will show signs of wear and previous use. Overall we expect it to be in very good condition, but if you are not entirely satisfied please get in touch with us.