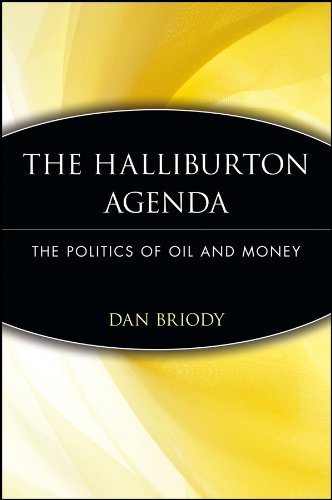 The Halliburton Agenda
by Dan Briody

In Stock
$16.49
+10% GST
Praise for THE HALLIBURTON AGENDA "With a blunt matter-of-fact tone, Briody describes the rise of the two companies from the dusty oil fields of west Texas to the marbled corridors of power in Washington, D.C. " --Publishers Weekly "This is a classic American love story of our time.
Very Good
Only 1 left

The Halliburton Agenda: The Politics of Oil and Money by Dan Briody

The author of the bestseller The Iron Triangle untangles a web of political back scratching in one of the world's most powerful companies Halliburton-a Texas oil-field company Dick Cheney ran before he became Vice President-has courted controversy for the better part of the twentieth century, but only recently has it received intense media scrutiny. In The Halliburton Agenda, Halliburton and its subsidiaries form the foundation of a fascinating story of influence peddling and behind-the-scenes political maneuvering that has only increased in momentum over the last decade-culminating in a firestorm of problems arising as soon as Cheney took office. This intriguing book shows readers where Halliburton has been doing business and with whom-topping the list so far are Iran, Iraq, and Libya. It also reveals how this juggernaut of a corporation has engaged in a cycle of profits that begins by selling products and services to potential terrorist states, contracting with the federal government during times of war against those states, then gaining valuable rebuilding contracts to help repair those states. It will also show how a Halliburton subsidiary, Kellogg Brown & Root, has become an indispensable part of the U.S. military, so much so that the two are indistinguishable at times. Halliburton is one of the first American companies to recognize the importance of aligning itself with powerful politicians, heavily contributing to campaigns, then cashing in on lucrative government contracts. Engaging and informative, The Halliburton Agenda carefully explores the arc of the company's success, its use of political affiliation, and the scope of its international business.

" If you want to get your blood boiling, don't bother sitting out in the sun. Read this book instead." ("CFO Europe, July 2004)

" If you want to get your blood boiling, don't bother sitting out in the sun. Read this book instead." ("CFO Europe, July 2004)

Following hard on the heels of "The Iron Triangle, an examination of international consultants the Carlyle Group, Briody turns his considerable investigative skills to the rise of the Halliburton Corp., its subsidiary Kellogg, Brown and Root and the transformation of the U.S. military establishment. With a blunt matter-of-fact tone, Briody describes the rise of the two companies from the dusty oil fields of west Texas to the marbled corridors of power in Washington, D.C. Briody contends that Halliburton and KBR have literally bought politicians, manipulated the contracting process and ridden the current wave of small wars to record profits. Small, detailed moments of intense private pressure and unscrupulous backroom deal-making dominate this story. While Briody seethes with indignation, there is a grudging respect for the skill with which the executives and politicians ply their trade and a bitter resignation at the reality of the ways of government contracting. Central to the Pentagon's post- Cold War strategy is outsourcing nonmilitary tasks to private contractors. One of the chief architects of this plan was Dick Cheney, defense secretary for the first President Bush. Briody argues that with Cheney now vice-president and Halliburton awarded a huge no-bid contract to reconstructIraq's oil fields, public outrage has grown. As the controversy simmers, Briody raises an important question: with Americans and Iraqis dying by the day, have military matters become so efficient and profitable for companies like Halliburton that war itself is easier to wage? At times the book is repetitive and has the feel of being rushed to press, but this urgency lends the book a certain gravity. Briody has his own agenda-- brilliantly illuminating the increasingly crucial nexus of public need, private profit and war making. "Agent, Daniel Greenberg. (May) ("Publishers Weekly, May 5, 2004)

DAN BRIODY is the author of the national bestseller The Iron Triangle: Inside the Secret World of the Carlyle Group (published by Wiley). Briody is an expert on the commingling of business and politics, particularly as it pertains to the war on terrorism and the so-called "military-industrial complex." An award-winning business journalist, Briody has written for Forbes, Wired, Red Herring, and The Industry Standard. He has also appeared as an expert in Michael Moore's Fahrenheit 9/11, and has been a guest on the Today show, The NewsHour with Jim Lehrer, C-SPAN's Washington Journal, National Public Radio's Fresh Air, and a host of other television and radio programs.

GOR002011124
The Halliburton Agenda: The Politics of Oil and Money by Dan Briody
Dan Briody
Used - Very Good
Paperback
John Wiley and Sons Ltd
2005-12-23
290
0471745944
9780471745945
N/A
Book picture is for illustrative purposes only, actual binding, cover or edition may vary.
This is a used book - there is no escaping the fact it has been read by someone else and it will show signs of wear and previous use. Overall we expect it to be in very good condition, but if you are not entirely satisfied please get in touch with us.