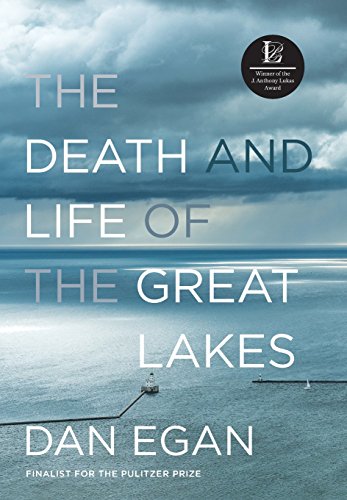 The Death and Life of the Great Lakes
by Dan Egan

A landmark work of science, history and reporting on the past, present and imperiled future of the Great Lakes.
Reviews:
Trustpilot
Very Good

The Death and Life of the Great Lakes Summary

The Death and Life of the Great Lakes by Dan Egan

The Great Lakes-Erie, Huron, Michigan, Ontario and Superior-hold 20 percent of the world's supply of surface fresh water and provide sustenance, work and recreation for tens of millions of Americans. But they are under threat as never before, and their problems are spreading across the continent. The Death and Life of the Great Lakes is prize-winning reporter Dan Egan's compulsively readable portrait of an ecological catastrophe happening right before our eyes, blending the epic story of the lakes with an examination of the perils they face and the ways we can restore and preserve them for generations to come.

For thousands of years the pristine Great Lakes were separated from the Atlantic Ocean by the roaring Niagara Falls and from the Mississippi River basin by a "sub-continental divide." Beginning in the late 1800s, these barriers were circumvented to attract oceangoing freighters from the Atlantic and to allow Chicago's sewage to float out to the Mississippi. These were engineering marvels in their time-and the changes in Chicago arrested a deadly cycle of waterborne illnesses-but they have had horrendous unforeseen consequences. Egan provides a chilling account of how sea lamprey, zebra and quagga mussels and other invaders have made their way into the lakes, decimating native species and largely destroying the age-old ecosystem. And because the lakes are no longer isolated, the invaders now threaten water intake pipes, hydroelectric dams and other infrastructure across the country.

Egan also explores why outbreaks of toxic algae stemming from the overapplication of farm fertilizer have left massive biological "dead zones" that threaten the supply of fresh water. He examines fluctuations in the levels of the lakes caused by manmade climate change and overzealous dredging of shipping channels. And he reports on the chronic threats to siphon off Great Lakes water to slake drier regions of America or to be sold abroad.

In an age when dire problems like the Flint water crisis or the California drought bring ever more attention to the indispensability of safe, clean, easily available water, The Death and the Life of the Great Lakes is a powerful paean to what is arguably our most precious resource, an urgent examination of what threatens it and a convincing call to arms about the relatively simple things we need to do to protect it.

Customer Reviews - The Death and Life of the Great Lakes

The Death and Life of the Great Lakes Reviews

"Dan Egan's deeply researched and sharply written The Death and Life of The Great Lakes...nimbly splices together history, science, reporting and personal experiences into a taut and cautiously hopeful narrative...Egan's book is bursting with life (and yes, death)." -- Robert Moor - New York Times Book Review
"Engaging...[and] impeccably researched...Told like a great story rather than an academic lecture." -- Anna M. Michalak - Nature
"Living up to . . . early acclaim, [The Death and Life of the Great Lakes] is easy to read, offering well-paced, intellectually stimulating arguments, bolstered by well-researched and captivating narratives." -- Lekelia Danielle Jenkins - Science
"Fascinating and brilliant." -- Vicky Albritton and Fredrik Albritton Jonsson - Los Angeles Review of Books
"This book feels urgent to policymakers and laypersons alike." -- Kerri Arsenault - Literary Hub
"An accessible, even gripping narrative about the massive, unforeseen costs of our interventions in the natural world. . . . The Death and Life of the Great Lakes is an engaging, vitally important work of science journalism." -- Eva Holland - The Globe and Mail
"The Death and Life of the Great Lakes reads like a mystery. . . . Egan knows how to pare a story to its most interesting elements. Having finished the book, I immediately started over." -- Louise Erdrich
"Dan Egan has done more than any other journalist in America to chronicle the decline of this once-great ecosystem, to alert the public to new threats, and to force governments to take remedial action." -- Grantham Prize for Excellence in Reporting on the Environment, Special Merit citation

Dan Egan is a reporter at the Milwaukee Journal Sentinel and a senior water policy fellow at the University of Wisconsin-Milwaukee's School of Freshwater Sciences. He has twice been a finalist for the Pulitzer Prize, and he has won the Alfred I. duPont-Columbia University Award, John B. Oakes Award, AAAS Kavli Science Journalism Award, and J. Anthony Lukas Work-in-Progress Award. A graduate of the Columbia Journalism School, he lives in Milwaukee with his wife and children.

GOR010797200
The Death and Life of the Great Lakes by Dan Egan
Dan Egan
Used - Very Good
Hardback
WW Norton & Co
2017-03-28
384
0393246434
9780393246438
Winner of Midwest Booksellers Choice Award 2017
Book picture is for illustrative purposes only, actual binding, cover or edition may vary.
This is a used book - there is no escaping the fact it has been read by someone else and it will show signs of wear and previous use. Overall we expect it to be in very good condition, but if you are not entirely satisfied please get in touch with us.