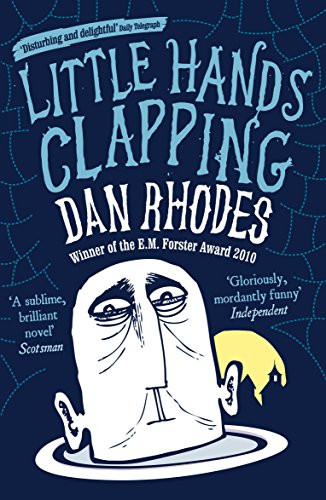 Used Price
$13.69
inc. GST
Free Shipping in Australia
'Totally sick and brilliant in all the right ways. He sucks you into his world and before you know it, you're willingly trapped. So very smart. I loved it' DOUGLAS COUPLAND
Reviews:
Trustpilot
Like New Very Good Good Well Read

Once upon a time, in a room above a German museum, there lived an old man . . . A caretaker by day, by night he enjoys the sound of silence, broken only by the occasional crunch of a spider between his teeth. However, the old man's solitude is disturbed as unusual activities at the museum start to attract attention. A pair of young and outrageously beautiful lovers, a baker's son with a passion for the euphonium, and a dog called Hans are just some of the innocents pulled into Rhodes's mesmerising world.

Disturbing and delightful. * * The Telegraph * *
A macabre, brilliant and terrifying novel. Good strong stuff. -- Michael Holroyd * * Guardian * *
Genius ... A sublime, brilliant novel. * * The Scotsman * *
A remarkable success. * * The Spectator * *
While never losing sight of the monstrousness that ensnares his characters, Rhodes remains gloriously, mordantly funny. * * The Independent * *
After reading Rhodes's book, many little hands should be clapping very loudly indeed. * * The Observer * *
An amusing fable about thwarted altruism and good intentions gone askew. It should please cynical idealists and idealistic cynics alike. * * Financial Times * *
Just trust us on this one... he really is one of the most inventive authors around. ***** * * HEAT * *
Reading it is like taking a deep breath into the lungs of your imagination. * * Scotland on Sunday * *
The sense that this is a fairy story, with all the implications of a moral message and an investigation of human nature that come with it, runs through the book and is heightened by its title . . . His gentle yet clever telling of the monstrous events at the museum finds humanity in the horror and makes his characters' unpleasant antics seem almost whimsical . . . After reading Rhodes's book, many little hands should be clapping very loudly indeed. -- Alice Fisher * * OBSERVER * *
Combining heady romance, nihilism and despair, human failings, and a fair amount of spider munching, this is a unique, sparkling story. Dan Rhodes is a writer to treasure. * * LIST * *
Cleverly interweaves a lovers' story with the dark, disturbing life of an old caretaker. -- Christina Koning * * Times * *
As funny as it is macabre. * * Sunday Herald * *
This is the kind of deliciously wicked tale that looks simple on the surface, but which covers hidden depths. A small masterpiece. -- Lesley MacDowall * * Herald * *
A spooky, brilliant read from a magical storyteller. * * Heat * *
This dark and curious fable is leavened by preposterous imagination and an airy wit. You may well, embarrassingly, laugh aloud. * * Independent on Sunday * *

Dan Rhodes was born in 1972. He is the author of five other books: Anthropology, Don't Tell Me the Truth About Love, Timoleon Vieta Come Home, Gold and, writing as Danuta de Rhodes, The Little White Car. In 2003 he was named by Granta magazine as one of their Twenty Best of Young British Novelists and in 2010 by the Daily Telegraph as one of their Best British Novelists Under Forty. He is the winner of many awards including the Author's Club First Novel Award and the E.M. Forster Award. He lives in Derbyshire.

GOR011131220
Little Hands Clapping by Dan Rhodes
Dan Rhodes
Used - Like New
Paperback
Canongate Books Ltd
2011-03-03
320
1847675301
9781847675309
N/A
Book picture is for illustrative purposes only, actual binding, cover or edition may vary.
The book has been read, but looks new. The book cover has no visible wear, and the dust jacket is included if applicable. No missing or damaged pages, no tears, possible very minimal creasing, no underlining or highlighting of text, and no writing in the margins.