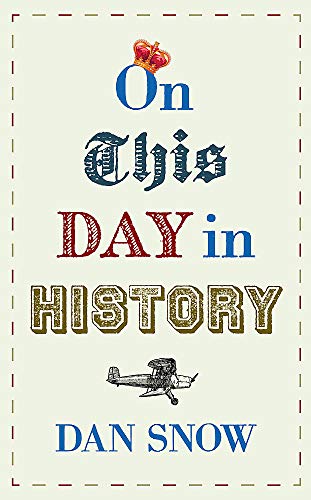 On This Day in History
by Dan Snow

In Stock
$16.49
inc. GST
3000 years of the most important stories from the past in 365 days -- from the Ides of March to D-Day, from Britain's favourite historian
Very Good Good
48 in stock

On This Day in History Summary

On This Day in History by Dan Snow

On which day was history's shortest war waged and won (in roughly 40 minutes)? How was Napoleon bested by a group of rabbits in 1807? Why did a dispute about beer in an Oxford pub lead to over 100 deaths and 470 years of penance? Why in 1752 did Britain go to bed on 2nd September and wake up on the 14th? How did a women's march in 1917 set off the Russian Revolution?

On This Day in History brings to life a key event that happened on each day of the year.

From the most important British battle that you've never heard of (20 May 685) to the first meeting of Lennon and McCartney (6 July 1957), and from why Julius Caesar should have been wary of the Ides of March (15 March 44BC) to the day Jeanne de Clisson became a pirate and single-handedly declared war on the King of France (2 August 1343), history is full of unlikely heroes and fascinating turning points.

In this book Dan Snow shows us how each day offers a different and unexpected insight into our past. And story by gripping story, this year grows into a vivid, very human history of the world.

On This Day in History Reviews

Dan Snow is a historian, BAFTA-winning broadcaster and television presenter. His hugely popular History Hit podcast is downloaded a million times a month, has over 250,000 keen followers on Twitter and he has recently launched a history TV channel. He has presented shows such asArmada, Grand Canyon and Vikings. He has a regular slot on The One Show on BBC1. He has written several books including Battlefield Britain and The Battle of Waterloo.

GOR009455402
On This Day in History by Dan Snow
Dan Snow
Used - Very Good
Hardback
Hodder & Stoughton General Division
2018-11-13
432
1473691273
9781473691278
N/A
Book picture is for illustrative purposes only, actual binding, cover or edition may vary.
This is a used book - there is no escaping the fact it has been read by someone else and it will show signs of wear and previous use. Overall we expect it to be in very good condition, but if you are not entirely satisfied please get in touch with us.