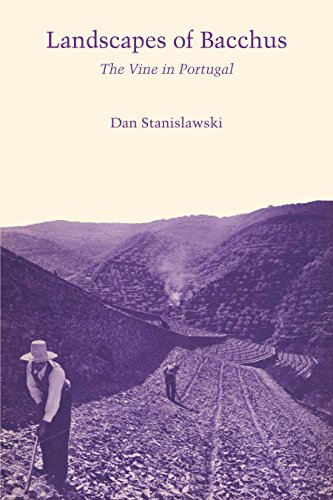 Landscapes Of Bacchus
by Dan Stanislawski

Landscapes Of Bacchus: The Vine in Portugal by Dan Stanislawski

In a country of disparate parts and of long, unbroken historical experience, there may be one dominant feature, a clue to the character of its regions. In Portugal the vine serves as this clue.

The vine has been an important aspect of the Iberian landscape since prehistoric times, and farmers still use Roman methods of cultivation that have been adapted to regional physical conditions and to socioeconomic structure. Southern Portugal today is almost vineless, but in the north three areas can be distinguished by their vine forms and their products. Dan Stanislawski examines these areas in detail.

High tree-vines surround plots of grain in the Minho Province. The grains and the slightly acid Green Wines provide subsistence and cash for the densely settled area of owner-operated small farms.

In the hanging garden terrace of the Douro, vines grown on tawny, baked schist slopes yield world-famous Port Wine, a product that must conform to strict quantity and quality controls supervised by the central government.

Mature table wines are produced in the Dao, an isolated cul-de-sac where cordons of vines are planted on small, individually owned plots. Control of wine-making is exercised by a central governing group and by producers' cooperatives.

Various wines originate in central Portugal. The lesser demarcated zones of Setubal, Colares, Carcavelos, and Bucelas yield fine wines. In other parts of the central region several wine types are produced in bulk. Some are used for blending and some for aging into quality table wines, but none is distinguished as a wine whose character is derived from its geographical location.

Dan Stanislawski (1903-1997) was Professor of Geography at the University of Arizona.

GOR009681153
Landscapes Of Bacchus: The Vine in Portugal by Dan Stanislawski
Dan Stanislawski
Used - Like New
Paperback
University of Texas Press
2014-11-07
228
0292769318
9780292769311
N/A
Book picture is for illustrative purposes only, actual binding, cover or edition may vary.
This is a used book - there is no escaping the fact it has been read by someone else and it will show signs of wear and previous use. Overall we expect it to be in very good condition, but if you are not entirely satisfied please get in touch with us.