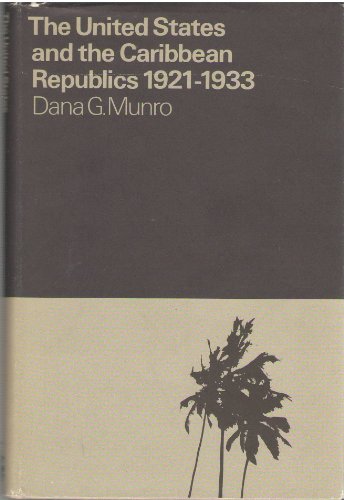 The United States and the Caribbean Republics, 1921-1933 by Dana Gardner Munro

The United States and the Caribbean Republics, 1921-1933 by Dana Gardner Munro

Between 1921 and 1933, the United States moved from a policy of active intervention to a policy of noninterference in the internal political affairs of the Caribbean states. How the shift from the diplomacy of the Taft and Wilson administrations to the Good Neighbor policy of Franklin Roosevelt occurred is the subject of Dana Gardner Munro's book. The author draws on official records and on his personal experience as a member of the Latin American Division of the United States Department of State to piece together the history of the transition in diplomatic policy.

Professor Munro concentrates on several important issues that changed the tone of the relations of the United States with Cuba, the Dominican Republic, Haiti, and the five Central American Republics: the failure to compel political reforms in Cuba from 1921 to 1923; the withdrawal of the occupations from the Dominican Republic and Haiti; the intervention in Nicaragua; the response to the Machado and Trujillo dictatorships; and the refusal to recognize revolutionary governments in Central America. The author's analysis sheds new light on the much-discussed Clark memorandum, on the degree to which policy furthered the interests of bankers and businessmen, and on the attitude of the American government toward dictatorial regimes.

GOR010961828
The United States and the Caribbean Republics, 1921-1933 by Dana Gardner Munro
Dana Gardner Munro
Princeton Legacy Library
Used - Very Good
Hardback
Princeton University Press
1974-08-21
406
0691046239
9780691046235
N/A
Book picture is for illustrative purposes only, actual binding, cover or edition may vary.
This is a used book - there is no escaping the fact it has been read by someone else and it will show signs of wear and previous use. Overall we expect it to be in very good condition, but if you are not entirely satisfied please get in touch with us
Trustpilot