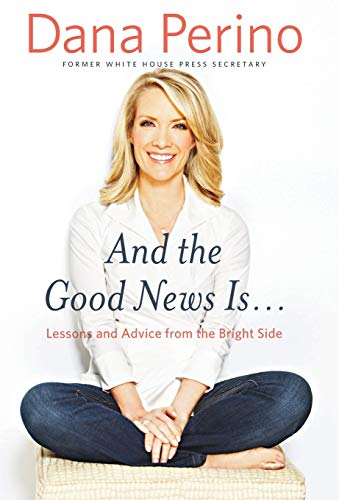 And The Good News Is...
by Dana Perino

Used Price
$17.19
inc. GST
Free Shipping in Australia
From her years as a press secretary for a President to her daily debates with colleagues on Fox News' The Five, Dana Perino reveals the lessons she's learned that have guided her through life, including stories from behind the scenes at the White House with President George W. Bush that the cameras never captured.
Very Good

And The Good News Is... Summary

And The Good News Is...: Lessons and Advice from the Bright Side by Dana Perino

Thoughtful, inspiring and often surprising, AND THE GOOD NEWS IS... traces Dana's unlikely journey through politics, the White House, and television. She has an uncanny ability for knowing what to say and how best to say it. A recurring theme in AND THE GOOD NEWS IS...is that planning has never worked for Dana; every time she has made a plan, something unexpected-and often better-has happened.
AND THE GOOD NEWS IS... blends a candid self-portrait with advice for allowing one's very best personality traits to shine through, emphasizing that dignity and civility are choices we make for ourselves.

And The Good News Is... Reviews

"A lovely memoir, both charming and wise, studded with invaluable life lessons garnered on her fascinating journey to the highest levels of media and government. A wonderful read."--Charles Krauthammer
"A wonderful book. A book full of the love of life. And full of gratitude. This book is blessedly free of cynicism, irony, posing. It's straight. It's good. And obviously a total reflection of its author."--Jay Nordlinger, National Review
"Congrats to Dana Perino! It's a great read, BTW. Little House on the Prairie meets West Wing."--Chris Stirewalt, Digital Politics Editor, Fox News
"If you want to be inspired by a successful woman who goes from ranching in the West, to the White House, to helping in Africa, to a fine marriage and a loving dog, you will find it in this book. You will also find the kind of honest advice about life, politics and the Presidency that makes you feel good. Now there's a rarity."--Marlin Fitzwater, former White House Press Secretary to Presidents Ronald Reagan and George H.W. Bush
"Part autobiography, part memoir of a press secretary in the White House, part career and life guidance, and part appeal to civility, Dana Perino's AND THE GOOD NEWS IS... is all parts captivating."--Donna Brazile
"The book is a study in character, and why surrounding one's self with people of good character (from Dana's husband, parents and grandparents to Tony Snow and George W. Bush) leads to a life well lived."--Doug Brunt, author of The Means and Ghosts of Manhattan
"This book is a gem--modest and moving, clear and unpretentious. It gives the kind of practical and even ethical advice everyone starting out needs, but it's also funny and full of great stories. Dana is a true role model."--Peggy Noonan
"This book is perfect for anyone interested in politics, media or simply advice about taking courageous chances in life, love and work. Dana has written a book that is as accessible for those who are just starting out on their career path as for those who are long-time students of current events and history."--Julie Roginsky, Fox News Contributor
"With this delightful blend of the political, personal, and professional, Dana Perino gives us a useful glimpse into one of the most remarkable workplaces in the world, the White House. Political junkies will revel in her insider tales but every reader will come away knowing more about the human dimension of working in the most powerful place on the planet."--Mike McCurry, former White House Press Secretary to President Bill Clinton

Dana Perino is a Fox News Contributor and co-host of one of the most popular shows on cable television, The Five. Perino was the first Republican woman to serve as the White House Press Secretary, and served for over seven years in the administration of George W. Bush, including at the Department of Justice after the terrorist attacks on 9/11. Perino lives in Manhattan with her husband, Peter McMahon, and their dog, Jasper.

GOR006906429
And The Good News Is...: Lessons and Advice from the Bright Side by Dana Perino
Dana Perino
Used - Very Good
Hardback
Little, Brown & Company
2015-04-14
256
1455584908
9781455584901
N/A
Book picture is for illustrative purposes only, actual binding, cover or edition may vary.
This is a used book - there is no escaping the fact it has been read by someone else and it will show signs of wear and previous use. Overall we expect it to be in very good condition, but if you are not entirely satisfied please get in touch with us.