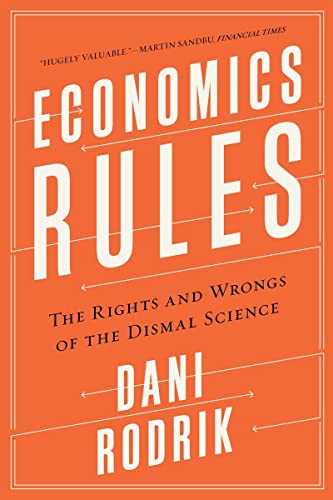 Used Price
$30.99
inc. GST
Free Shipping in Australia
"A hugely valuable contribution. . . . In setting out a defence of the best in economics, Rodrik has also provided a goal for the discipline as a whole." -Martin Sandbu, Financial Times
Reviews:
Trustpilot
Very Good

Economics Rules: The Rights and Wrongs of the Dismal Science by Dani Rodrik (Harvard University)

In the wake of the financial crisis and the Great Recession, economics seems anything but a science. In this sharp, masterfully argued book, Dani Rodrik, a leading critic from within, takes a close look at economics to examine when it falls short and when it works, to give a surprisingly upbeat account of the discipline.

Drawing on the history of the field and his deep experience as a practitioner, Rodrik argues that economics can be a powerful tool that improves the world-but only when economists abandon universal theories and focus on getting the context right. Economics Rules argues that the discipline's much-derided mathematical models are its true strength. Models are the tools that make economics a science.

Too often, however, economists mistake a model for the model that applies everywhere and at all times. In six chapters that trace his discipline from Adam Smith to present-day work on globalization, Rodrik shows how diverse situations call for different models. Each model tells a partial story about how the world works. These stories offer wide-ranging, and sometimes contradictory, lessons-just as children's fables offer diverse morals.

Whether the question concerns the rise of global inequality, the consequences of free trade, or the value of deficit spending, Rodrik explains how using the right models can deliver valuable new insights about social reality and public policy. Beyond the science, economics requires the craft to apply suitable models to the context.

The 2008 collapse of Lehman Brothers challenged many economists' deepest assumptions about free markets. Rodrik reveals that economists' model toolkit is much richer than these free-market models. With pragmatic model selection, economists can develop successful antipoverty programs in Mexico, growth strategies in Africa, and intelligent remedies for domestic inequality.

At once a forceful critique and defense of the discipline, Economics Rules charts a path toward a more humble but more effective science.

"Full of good insights. . . . If you're at all interested in economics you'll want to read it." -- Clive Crook - BloombergView
"Rodrik's plea is for economics to be practiced with a bit more humility both by those who extol free markets and those who would tame them." -- Steven Pearlstein - Washington Post
"The best economists make the best methodologists, and Dani Rodrik is both. His Economics Rules is the single best source for explaining the strengths and weaknesses of economics to an outside audience." -- Tyler Cowen, George Mason University, author of The Great Stagnation
"In Economics Rules, enjoyment enhances learning, with lessons for economists and non-economists alike-indeed, ten commandments for each. The book is a page-turner with every page carrying an important and memorable take-away." -- Margaret Levi, director, Center for Advanced Study in the Behavioral Sciences, Stanford University

Dani Rodrik, a prize-winning economist, is the Ford Foundation Professor of International Political Economy at Harvard's John F. Kennedy School of Government. He is the author of The Globalization Paradox and Economics Rules.

GOR008963206
Economics Rules: The Rights and Wrongs of the Dismal Science by Dani Rodrik (Harvard University)
Dani Rodrik (Harvard University)
Used - Very Good
Paperback
WW Norton & Co
2016-10-07
272
0393353419
9780393353419
N/A
Book picture is for illustrative purposes only, actual binding, cover or edition may vary.
This is a used book - there is no escaping the fact it has been read by someone else and it will show signs of wear and previous use. Overall we expect it to be in very good condition, but if you are not entirely satisfied please get in touch with us.