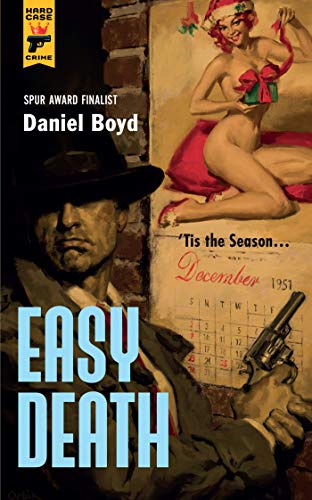 Out of Stock
$18.49
inc. GST
'Twas the week before Christmas ...and two robbers hired by a local crime boss manage to heist half a million dollars from an armored car.
Very Good
Only 0 left

'TWAS THE WEEK BEFORE CHRISTMAS - - and two robbers hired by a local crime boss manage to heist half a million dollars from an armored car. But getting the money and getting away with it are two different things, especially with a blizzard coming down, the cops in hot pursuit, and a double-crossing gambler and a murderous park ranger threatening to turn this white Christmas blood red.

"One hell of a tale, enthralling, humorous, and diverting." - Mystery Scene Mag

"He has come up with a refreshing novel that deserves attention." - Book Reporter

"The clever plotting and touches of humor make this an excellent holiday crime caper for readers of hard-boiled mystery." - Library Journal

"Besides writing convincingly about cops and criminals, Boyd (Nada), the pseudonym of a former police chief in central Ohio, captures the feel of postwar smalltown America, and even manages to get in some telling commentary on the period's racial prejudice." - Publishers Weekly Starred Review

"Easy Death proves to be a slyly funny and entertaining read." - Booklist

"Daniel Boyd" is the pseudonym of a veteran police officer who served for nearly thirty years in a department in central Ohio, including four years as Chief of Police. EASY DEATH is his first crime novel. His one prior novel, 'NADA, was published in 2010 and was nominated for the Spur Award for Best First Novel by the Western Writers of America.

GOR007138032
Easy Death by Daniel Boyd
Daniel Boyd
Hard Case Crime
Used - Very Good
Paperback
Titan Books Ltd
2014-11-14
272
0857685791
9780857685797
N/A
Book picture is for illustrative purposes only, actual binding, cover or edition may vary.
This is a used book - there is no escaping the fact it has been read by someone else and it will show signs of wear and previous use. Overall we expect it to be in very good condition, but if you are not entirely satisfied please get in touch with us.