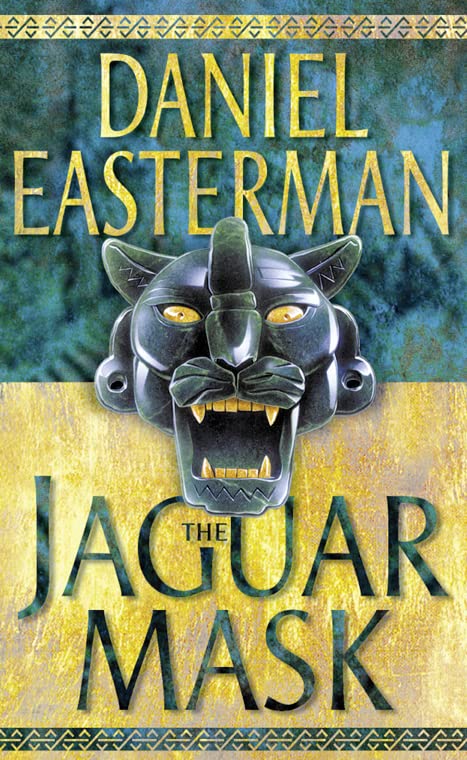 The Jaguar Mask
by Daniel Easterman

Set in the heart of the American jungle and featuring Declan Carberry, the not-so handsome hero of Day of Wrath, this page-turner oozes excitement, exotica and Formula One suspense.

The Jaguar Mask by Daniel Easterman

Set in the heart of the American jungle and featuring Declan Carberry, the not-so handsome hero of Day of Wrath, this page-turner oozes excitement, exotica and Formula One suspense.

Archaeologist Leo is on a dig. But this is no ordinary assignment. He's deep in the heart of the Mexican jungle uncovering another centuries-old Mayan city. Like a surgeon performing a most-intricate operation, Leo and his team skilfully remove each crumb of earth with the utmost precision. In France, Declan Carberry is busy trying to solve a string of ritual serial murders. Horrific in the extreme, the questions are who and why? Declan needs to move fast, for time is running out.

Delving into the history of the Conquistadors and the Maya of South America, this vertiginous tale of snaring and netting, old rituals and modern codes, blood-letting and immortality is Easterman at his dizzying best.

'The Jaguar Mask will satisfy anyone who appreciates an old-fashioned, well-plotted adventure thriller which has been given a hard modern edge' Yorkshire Evening Post

'A rip-roaring roller coaster of a read with a body count off the Richter scale, admirable heroes and disconcertingly evil baddies. Great stuff' Irish Independent

Daniel Easterman was born in Belfast in 1949. He was a lecturer at Newcastle University for a number of years, and is fluent in several languages. Dubbed by The Purloined Letter as `easily the best thriller writer working today', he is the author of eleven critically-acclaimed novels.

GOR010517585
The Jaguar Mask by Daniel Easterman
Daniel Easterman
Used - Like New
Paperback
Unknown
0
0006512933
9780006512936
N/A
Book picture is for illustrative purposes only, actual binding, cover or edition may vary.
This is a used book - there is no escaping the fact it has been read by someone else and it will show signs of wear and previous use. Overall we expect it to be in very good condition, but if you are not entirely satisfied please get in touch with us.