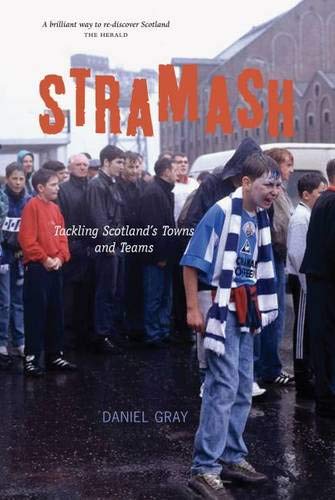 Fatigued by bloated big-game football and bored of samey big cities, Daniel Gray went in search of small town Scotland and its teams. At the time when the Scottish club game is drifting towards its lowest ebb once more, Stramash singularly fails to wring its hands and address the state of the game, preferring instead to focus on Bobby Mann's waistline. Part travelogue, part history and part mistakenly spilling ketchup on the face of a small child, Stramash takes an uplifting look at the country's nether regions. Using the excuse of a match to visit places from Dumfries to Dingwall, Gray surveys Scotland's towns and teams in their present state. Stramash accomplishes the feats of visiting Dumfries without mentioning Robert Burns, being positive about Cumbernauld and linking Elgin City to Lenin. It is a fond look at Scotland as you've never seen it before.

There have been previous attempts by authors to explore the off-the-beaten paths of the Scottish football landscape, but Daniel Gray's volume is in another league. - THE SCOTSMAN

An excellent book about the country's smaller teams - [Stramash] captures the vague romance that still clings to these smaller Scottish clubs. It will make a must-read for every non-Old Firm football fan - and for many Rangers and Celtic supporters too. - DAILY RECORD

As he takes in a match at each stopping-off point, Gray presents little portraits of small Scottish towns, relating histories of declining industry, radical politics and the connection between a team and its community. It's a brilliant way to rediscover Scotland. - THE HERALD

A great read, because Gray doesn't write about just football, he uses football as an excuse to explore the histories of small towns in Scotland. - THE SKINNY

Why do the Gers and Hoops have retail outlets in the capital? Why do buses depart for Glasgow on a Saturday morning from every corner of Scotland? Gray's book is a splendid attempt to answer these questions, and more besides - The result is sociology at its best, which is to say eminently readable - Stramash may turn out to be a memoir of the way we were, and an epitaph. - SUNDAY HERALD

I defy anyone to read Stramash and not fall in love with Scottish football's blessed eccentricities all over again - Funny enough to bring on involuntary laugh out loud moments. - THE SCOTTISH FOOTBALL BLOG

Daniel Gray is the author of Homage to Caledonia: Scotland and the Spanish Civil War. He has also written on football for When Saturday Comes and Fly Me To The Moon, the fanzine of his beloved Middlesbrough FC, and is a book reviewer for History Scotland and The Skinny, and also writes for the magazines The Leither and Scottish Labour Review. He is a 2003 Politics and History graduate of Newcastle University. His first book, the Historical Dictionary of Marxism, was published in 2005. He is yet to sell the film rights. Gray has worked as a researcher, contributor and writer on BBC radio and on STV's miniseries The Scots Who Fought Franco. He lives in Leith with his wife Marisa.

GOR002350487
Stramash: Tackling Scotland's Towns and Teams by Daniel Gray
Daniel Gray
Used - Very Good
Paperback
Luath Press Ltd
2010-10-04
192
1906817669
9781906817664
N/A
Book picture is for illustrative purposes only, actual binding, cover or edition may vary.
This is a used book - there is no escaping the fact it has been read by someone else and it will show signs of wear and previous use. Overall we expect it to be in very good condition, but if you are not entirely satisfied please get in touch with us.