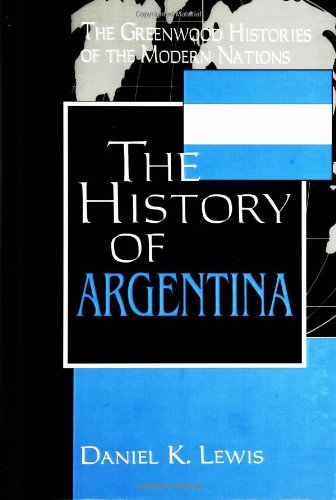 The History of Argentina
by Daniel K. Lewis

Used Price
$68.99
inc. GST
Free Shipping in Australia
This history of Argentina provides a solid introduction to the persons, events, and factors that have helped shape the nation. Covering the entire sweep of Argentina's history from pre-Columbian times to 2001, the narrative outlines the connections between the colonial era and the 19th century.
Reviews:
Trustpilot
Very Good

The History of Argentina Summary

The History of Argentina by Daniel K. Lewis

Argentina is a country of enormous potential and challenging problems. In recent decades, violence and military dictatorships have upset the political system, and economic instability has held in check efforts to develop the country's industries. This up-to-date and accurate history of Argentina provides a solid and engaging introduction to the persons, events, and factors that have helped shape the nation. Covering the entire sweep of Argentina's history from pre-Columbian times to 2001, the narrative outlines the connections between the colonial era and the 19th century and focuses closely on the last three decades of the 20th century, during which Argentina dealt with the legacies of Peronism and of military dictatorship, as well as the challenges of establishing a stable democracy.

Also included are a timeline of historic events in Argentina, biographical sketches of key people in its history, a glossary of terms, and a bibliographic essay of works in English for further study. All libraries should update their collection of Latin American histories with this work, which is ideal for students and interested readers.

Customer Reviews - The History of Argentina

The History of Argentina Reviews

?Especially recommended for undergraduate Latin America courses as an introduction to Argentine history, the book includes a useful time line, a helpful glossary, biographical sketches of political and cultural figures, and a bibliographical essay.?-Choice

DANIEL K. LEWIS is Associate Professor of History at California State Polytechnic University in Pomona. His research focuses on grain farmers, the state, and changing economic and political conditions between the two world wars in Argentina.

GOR009682431
The History of Argentina by Daniel K. Lewis
Daniel K. Lewis
Greenwood Histories of the Modern Nations
Used - Very Good
Hardback
ABC-CLIO
2001-08-01
240
0313312567
9780313312564
N/A
Book picture is for illustrative purposes only, actual binding, cover or edition may vary.
This is a used book - there is no escaping the fact it has been read by someone else and it will show signs of wear and previous use. Overall we expect it to be in very good condition, but if you are not entirely satisfied please get in touch with us.