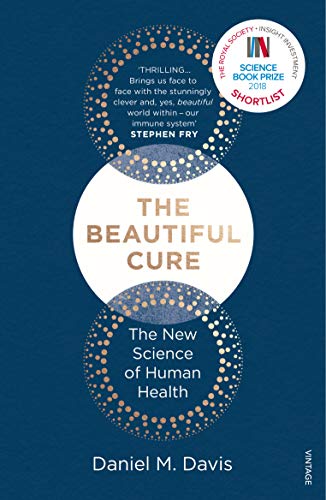 The Beautiful Cure: The New Science of Human Health by Daniel M Davis

Our immune system is one of the great marvels of nature - and it holds the key to human health.

Here, Professor Daniel Davis charts the groundbreaking scientific quest to understand how it fights disease and enables the body to heal itself. He explains how it is affected by stress, sleep, age and our state of mind, and reveals how all of this knowledge is now unlocking a revolutionary approach to medicine and well-being.

The Beautiful Cure tells a dramatic story of detective work and discovery, of puzzles solved and of the mysteries that remain, and of lives sacrificed and saved.

'Wonderful... recounts in exceptionally clear and sympathetic prose how research into the immune system has resulted in a health revolution' HENRY MARSH

Thrilling ... An eye-opening tour de force of scientific writing that reads like the best kind of adventure story -- Stephen Fry
One of the best accounts I have yet come across of the nature of biological science ... Daniel Davis's wonderful book recounts in exceptionally clear and sympathetic prose how research into the immune system has resulted in a health revolution -- Henry Marsh * New Statesman *
Thoroughly absorbing ... Davis is a wonderful storyteller -- Bill Bryson
Terrific ... Davis relates the extraordinary modern developments in supercharging the body's own immune system to fight disease, and one day maybe even eliminate cancer -- Steven Poole * *****Telegraph *
Thrilling ... Do not underestimate the importance of immunology. This field relates to you personally -- Adam Rutherford * Guardian *
An inspirational book that not only reveals the secret joys of scientific discovery but is jam-packed full of revelations for non-scientists * Mail on Sunday *
Forget AI, robotics, the internet of things. This is where the future feels strange and exciting: in the 'inner universe' of our immune system, and in the radically new therapies that are using it to conquer disease * Sunday Times *
Highly readable, beautifully researched, backed up with notes, references and interviews by Davis himself, whose status as an immunology professor confers added credibility. He believes that we now know enough about the major components and interactions of the immune system to begin manipulating them to cure diseases such as cancer. We stand, he predicts, on the threshold of a medical revolution * New Scientist *
A sweeping tour d'horizon ... lucid and entertaining ... Much as Siddhartha Mukherjee did in his book The Gene, Davis expertly weaves together human stories and scientific endeavour * The Times *
New ways to treat cancer, diabetes, arthritis and other age-related diseases ... Davis is a sure and engaging guide to these developments * Observer *

Daniel M. Davis is Professor of Immunology at the University of Manchester. His research, using super-resolution microscopy to study immune cell biology, was listed in Discover magazine as one of the top 100 breakthroughs of the year. His previous book, The Compatibility Gene, was longlisted for the 2014 Royal Society Winton Science Book Prize, shortlisted for the Society of Biology Book Prize and described by Bill Bryson in the Guardian's Books of the Year as 'elegantly written and unexpectedly gripping'. He is also the author of over 120 academic papers, collectively cited over 10,000 times, including articles in Nature, Science and Scientific American.

GOR009775892
The Beautiful Cure: The New Science of Human Health by Daniel M Davis
Daniel M Davis
Used - Very Good
Paperback
Vintage Publishing
2019-02-07
272
1784702218
9781784702212
Short-listed for Royal Society Insight Investment Science Book Prize 2018 (UK)
Book picture is for illustrative purposes only, actual binding, cover or edition may vary.
This is a used book - there is no escaping the fact it has been read by someone else and it will show signs of wear and previous use. Overall we expect it to be in very good condition, but if you are not entirely satisfied please get in touch with us.