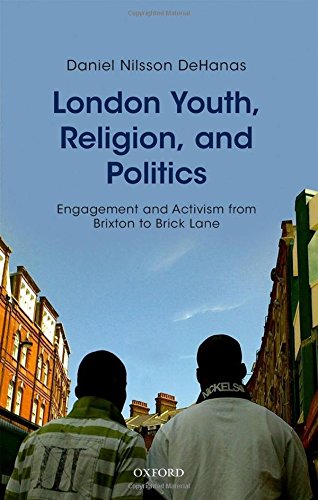 In Stock
$71.99
inc. GST
This study concerns the role of religion in the civic integration of London's second-generation youth through comparative ethnographic studies of two groups: the predominantly Christian Jamaican population in Brixton and the predominantly Muslim Bangladeshi population of the East End.
Very Good
Only 1 left

For more than a decade the 'Muslim question' on integration and alleged extremism has vexed Europe, revealing cracks in long-held certainties about the role of religion in public life. Secular assumptions are being tested not only by the growing presence of Muslims but also by other fervent new arrivals such as Pentecostal Christians. London Youth, Religion, and Politics focuses on young adults of immigrant parents in two inner-city London areas: the East End and Brixton. It paints vivid portraits of dozens of young men and women met at local cafes, on park benches, and in council estate stairwells, and provides reason for a measured hope. In East End streets like Brick Lane, revivalist Islam has been generating more civic integration although this comes at a price that includes generational conflict and cultural amnesia. In Brixton, while the influence of Pentecostal and traditional churches can be limited to family and individual renewal, there are signs that this may be changing. This groundbreaking work offers insight into the lives of urban Muslim, Christian, and non-religious youth. In times when the politics of immigration and diversity are in flux, it offers a candid appraisal of multiculturalism in practice.

this is a very timely and worthwhile book that successfully illustrates the complex struggles of second-generation youth - regardless of ethnicity and religion - showing that they are as active as their peers and finally, that in some contexts, religion plays a role in the articulation of (political) identities and modes of civic participation. * Petra Kuppinger, Reading Religion *
DeHanas has provided a valuable, empirically rich text that is theoretically informed and contributes to increasing our understanding of diversity, integration and to what degree different forms of Christianity and Islam influence the daily lives of young people in a global city. This comparative approach is a useful corrective to the constant exceptionalisation of British Muslim young people and offers a nuanced enquiry into types of British African-Caribbean youth religiosity. * Sadek Hamid, LSE Review of Books *
Apart from American classics such as Will Herberg's Protestant-Catholic-Jew (1955) religion is often missing from research on immigration, ethnicity and identity. One valuable aspect of this study is that religion plays a central role in his analysis and conclusions, in which black Jamaicans often have a connection to evangelical Protestantism, especially Pentecostalism, and Bengalis invariably come from families in which Islam is the key component of culture and identity. Thus DeHanas seeks to weigh the influences of race, ethnicity, religion and citizenship in the formation of identity. * Bryan S. Turner, British Journal of Sociology *
This book is outstanding in that it focuses on one city, London, and compares the political and social evolution of second-generation British youth of different migrant origins: British Muslim Bangladeshis, British Christian Jamaicans, and nonreligious youth. It is original because no other book to my knowledge to date has presented such a comparative study and comprehensive findings on the integration process of youth from different immigrant ethnic backgrounds. * Moha Ennaji, Digest of Middle East Studies *
This is an interesting, well-written, and engaging volume with some intriguing key findings. One of DeHanas's main strengths is the way in which the depth of his fieldwork resonates throughout the volume, providing the reader with much richness and detail. * Emily Winter, Islam and Christian-Muslim Relations *
The author adeptly goes into beautiful narrative detail of his interactions during ethnographic observation with local community people and members of churches and mosques. It is certainly thought-provoking when DeHanas emphasizes that mosques focus on the "communal" impact of the individual, while churches tend to focus on the more individualistic, subjective self. * Asma Mustafa, Journal for the Scientific Study of Religion *
This dense and carefully argued book provides a wealth of information about the implications of "decultured" Islam or "de-ethnicized" evangelicalism for the youth, especially vis-a-vis the integration of second-generation immigrants as engaged citizens. ... Students of migration, religion, and race will greatly benefit from its insightin particular, its reflection on how race, ethnicity, and religion intersect for immigrants' integration. * Soulit Chacko, International Migration Review *
Daniel Nilsson DeHanas' empirically driven analysis should be read, marked, learned and inwardly digested by all those who care about our democratic future and the place of second-generation migrants in this. I commend it warmly. * Grace Davie, Professor Emeritus in Sociology, University of Exeter *
Drawing on a much-needed comparative study, DeHanas provides a fascinating insight into the civic integration and political participation of British Muslim, Christian and non-religious young people in a changing Britain. * John Eade, Professor of Sociology & Anthropology, University of Roehampton *
What distinguishes this book ... is the way it engages with questions about religion and its influence on civic engagement, social action, and national identity. Although not exclusively focused on religious individuals, DeHanas recruited a large portion of his participants within and around religious institutions and, more unusually, uses ethnographic insights to trace the influence and popularity of such institutions and their leaders on young ethnic minority populations ... London Youth, Religion and Politics contains a wealth of resources for characterising and understanding such knowledge systems among ethnic minority religious traditions and thus contains valuable lessons for scholars working in ethnic studies, urban studies, the sociology of religion as well as in other academic disciplines * Stephen H. Jones, Journal of Contemporary Religion *

Daniel Nilsson DeHanas is Lecturer of Political Science and Religion at King's College London. He is Editor of the journal Religion, State and Society.

GOR009715891
London Youth, Religion, and Politics: Engagement and Activism from Brixton to Brick Lane by Daniel Nilsson DeHanas
Daniel Nilsson DeHanas
Used - Very Good
Hardback
Oxford University Press
2016-08-13
250
019874367X
9780198743675
N/A
Book picture is for illustrative purposes only, actual binding, cover or edition may vary.
This is a used book - there is no escaping the fact it has been read by someone else and it will show signs of wear and previous use. Overall we expect it to be in very good condition, but if you are not entirely satisfied please get in touch with us.